Ferrari's return to form in Formula 1 has come as the result of a change of attitude in how it develops its cars, something we can see when we look in detail at recent updates

Last year the Maranello team pushed the boundaries with a very innovative approach to the new regulations. It has continued to think outside of the box this season too.

It has also been very aggressive with its development push, something that was not always the case during its recent past.

This complexity is not only related to the airflow that goes around the car but also by the number of vortices that are generated in a bid to increase the efficiency of the car.

In Canada, Ferrari's floor was a pretty big step forward for the team, and the fact something like that is brought in and works first time says a lot about how good the team's hit rate is now with new parts.

Here we look at the changes that Ferrari introduced in Canada, and how it has impacted on what the team is doing in France this weekend too.

In this 2D animation we uncover the changes made to the SF71H's floor in Canada, as the slots on the outer edge have been enlarged and the fully enclosed hole in the centre of the surface has been discarded.

The splitter extensions have become an area of intense development for all the teams since they became possible under the new regulations in 2017.

Having already led the charge on their development throughout last season, Ferrari hasn't relented this year either as the area now features three well defined L-shaped elements.

Ferrari also evaluated a new front wing during free practice in France, which was a mix of the old wing and recent wing concepts on the outside section. 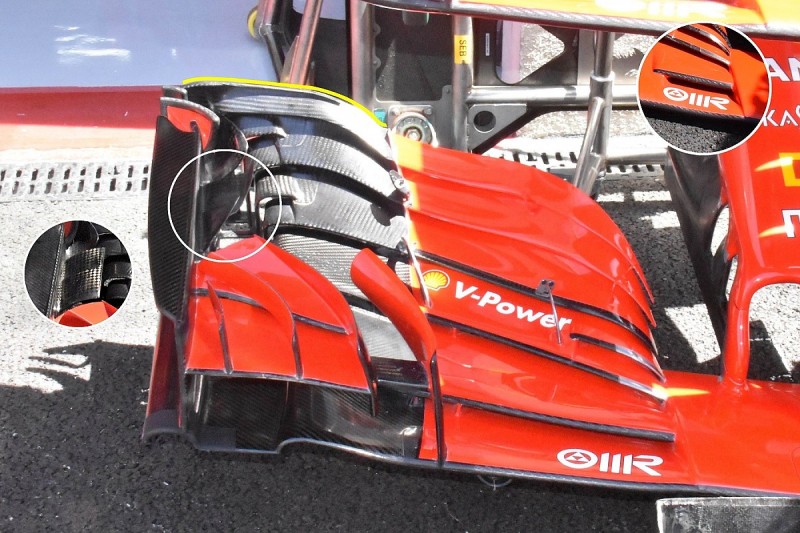 The wing consists of several subtle changes, all designed to improve how the airflow moves downstream.

This will influence not only the balance of the car and the strength of the outwash, but in doing so alter the turbulent wake generated by the front tyre too.

The aero team at Ferrari have once again returned to the full length slot in the wing's main plane, rather than the shorter slot near the neutral section (upper right inset).

Meanwhile, the previously squared outer section of the flaps now have a more graduated slope (highlighted in yellow), altering the direction of the airflow as it meets with the face of the tyre behind.

Perhaps the most obvious changes are the new endplate canards, with triangular and upwardly arched appendages favoured over the previous single but slotted downwardly arched canard.