The FIA stewards at the Abu Dhabi Grand Prix were "surprised" by Fernando Alonso's repeated corner cutting in the closing stages, according to Formula 1 race director Charlie Whiting

Alonso received three consecutive five-second time penalties for leaving the track and gaining an advantage in the closing laps of his last F1 start.

Alonso was trying to catch Kevin Magnussen for 10th place and claim the last point of his F1 career when he cut the track in Turns 8 and 9.

He repeated the move twice more, setting the fastest middle sector times of the race in the process, with the notification of the offences timed at 1847, 1851 and 1852.

Each time the stewards added five seconds to his race time, and gave him a penalty point. In the end the total of 15 seconds added did not impact his 11th place.

When asked about the offence by Autosport, and if a more serious penalty was considered, Whiting said: "I think they were surprised it happened three laps in a row. And they just gave him a penalty each time.

"It was the end of the race, and I don't think it would have been very nice to give someone like Fernando a black flag in his last race, do you? I don't think the black flag was ever discussed."

Alonso, who told his team on the radio "I have 1800 points" when urged to chase down Magnussen for 10th, said he had tried as hard as he could to make progress in his final race.

"We tried, we gave it all on track," he said. "We were fighting with the two Haas until the last couple of corners.

"It was a nice weekend, and also the in-lap was very emotional. It was a very touching weekend from F1, from my team, from the fans.

"I had a lot of support and a lot of respect and I feel honoured."

Regarding the doughnuts he performed with Lewis Hamilton and Sebastian Vettel after the flag he said: "It was very nice. I appreciate it.

"It was improvised because they were doing donuts in other corners and I drove by and I saw them driving to the right and left of me and we drive that way until the finish line.

"I'm thankful. They are two great champions, with Max [Verstappen] too, and it's battles that I will miss. So, in the end I think it was a good day." 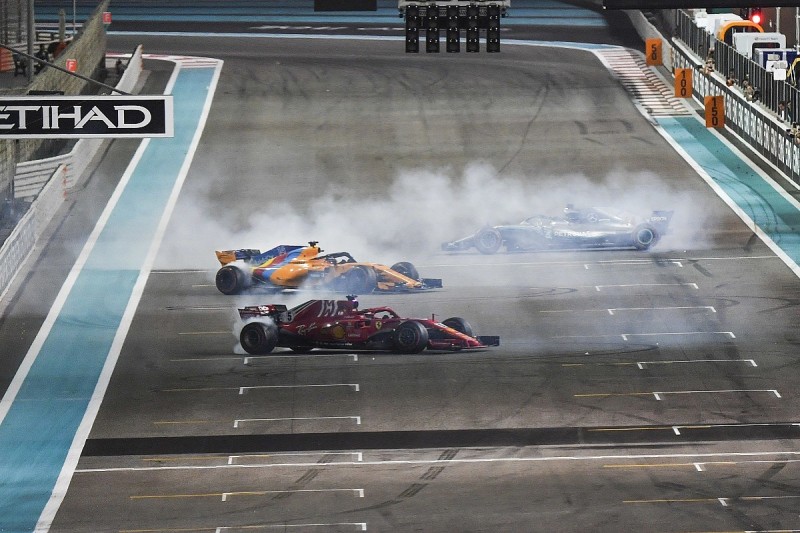