Hulkenberg's came to rest upside down, leaning against the barrier at the outside of the Turn 8/9 chicane, after he was sent into a series of flips by his clash with Romain Grosjean.

The policy in such circumstances is to wait for the car to be righted before trying to get the driver out.

But the length of time it took for Hulkenberg to emerge from the wreckage led some observers to suggest that the halo had made it harder for him to get out.

Whiting stressed that Hulkenberg actually had more space because of the way the halo supports the whole cockpit.

"Quite clearly that's one of the sort of accidents the halo was designed to help with," Whiting said when asked by about the situation by Autosport.

"It provides more space for the driver once the car is upside down.

"That was one of the things we wanted to make sure was still possible [during the prove-out phase for the halo].

"When you have an accident like that the radio from the car is automatically routed to race control so we get immediate information.

"Drivers normally say 'I'm OK' or 'I'm fine,' and we relay that to the doctors on their way to the scene.

"Then they can take their time to get the car righted and let him get out."

When asked about any criticism of the situation on Sunday Whiting added: "We knew he was OK and there was nothing to worry about there.

"So the routine under those circumstances is to put the car back on its wheels, which has to be done carefully of course.

"Once back on its wheels he was able to get out by himself.

"It was very controlled from what I could see, and our medical delegate was more than happy with the way it was done. It all worked exactly as it should." 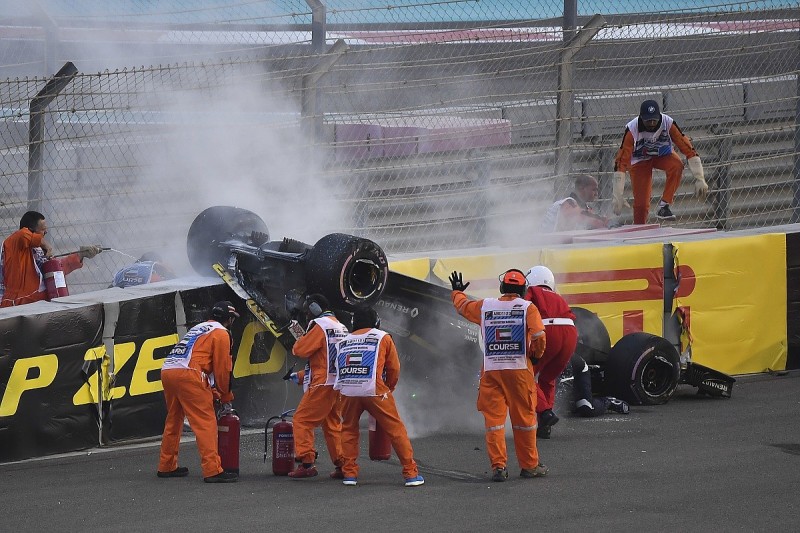 Renault F1 executive director Marcin Budkowski, who was working for the FIA while the halo was being developed, agreed that situation was handled correctly.

"In my previous life in the FIA there were a lot of questions as to whether it would be negative," he told Autosport.

"It gives the driver a lot more space. Waiting to turn the car over is the general policy, and that was the case before the halo.

"Obviously there was some amount of fire in the car that had to be extinguished. If it wasn't possible, then I think it was a different story, and they probably would have extracted him.

"Once the fire is out, effectively there is no risk to the driver, the driver speaks and he's not hurt, the safest thing is to flip the car.

"If you ask Nico it probably didn't happen quickly enough, but it was still the right thing to do."