Lewis Hamilton’s recovery drive to finish second at the Formula 1 Emilia Romagna Grand Prix was helped when he managed to reverse back on to the track after his off at Tosa.

The F1 world champion had run wide through the gravel trap and nudged into the barriers at the Tosa hairpin on lap 31, after he hit a damp patch while lapping backmarker George Russell.

Stuck against the barriers, Hamilton spent ages trying to work out how to get going again – with it pretty clear he needed to go backwards.

After engaging reverse gear, Hamilton backed up all the way through the gravel trap and on to the track before getting going again.

Such action raised eyebrows, however, with some suggesting that it was both dangerous and against the rules to reverse on to a live race track.

It also triggered famous memories of the 1989 Portuguese Grand Prix when Nigel Mansell was given the black flag for having reversed in the pitlane after skidding past his pit crew as he came in for fresh rubber.

However, while Mansell had the rule book thrown at him this day, Hamilton’s manoeuvre was given the all clear by the FIA.

The reasons are actually quite simple.

In the Mansell case, the rules remain in place today that cars cannot be reversed under their own power down the pitlane.

Article 28.3 of F1’s sporting regulations states: “At no time may a car be reversed in the pit lane under its own power.”

When a car is on track, though, there is nothing specific in the regulations that states cars cannot be driven in reverse gear.

In fact, the reason that it is mandatory for F1 cars to have a reverse gear is because it guarantees drivers have an ability to move themselves backwards if needed to recover from an incident.

The only requirement on a driver if he is reversing is for it be done in a safe manner.

Article 27.3 of the Sporting Regulations states: “Should a car leave the track the driver may re-join, however, this may only be done when it is safe to do so and without gaining any lasting advantage.”

Article 27.4 adds: “At no time may a car be driven unnecessarily slowly, erratically or in a manner which could be deemed potentially dangerous to other drivers or any other person.” 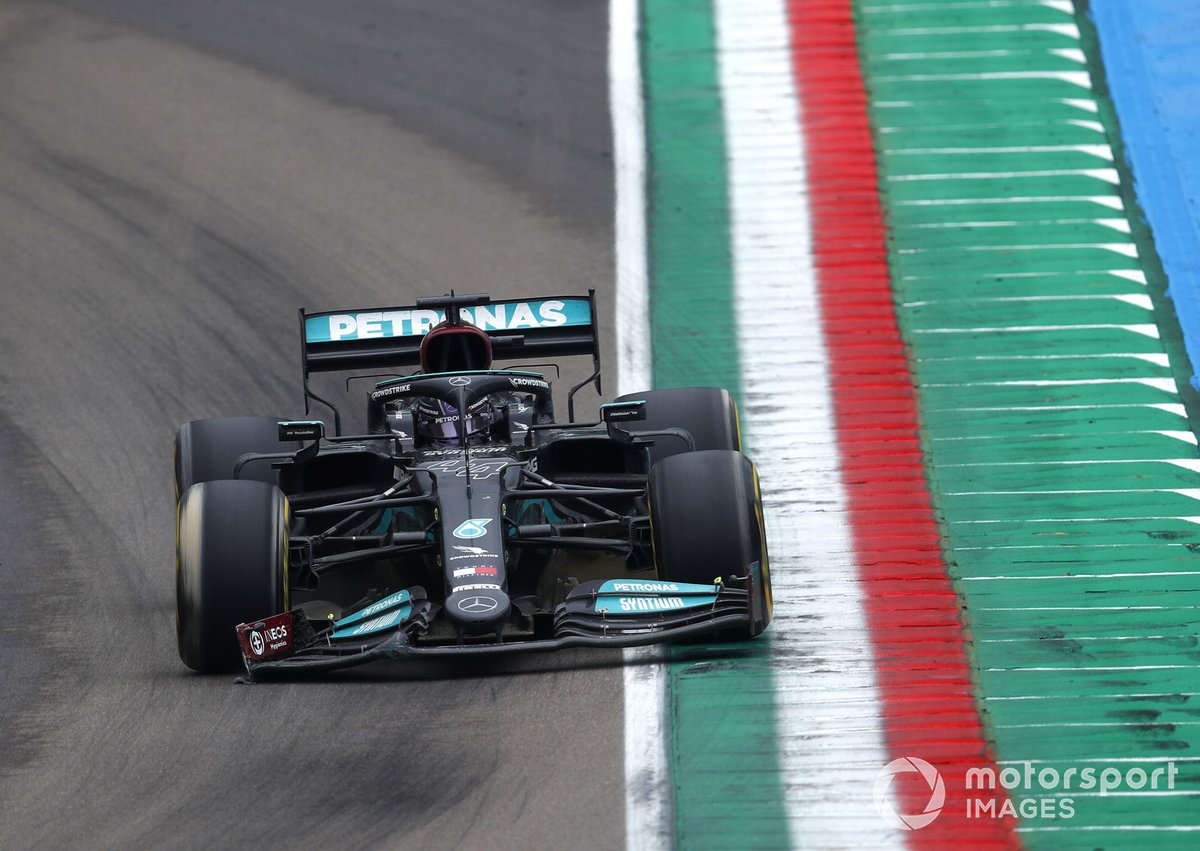 Lewis Hamilton, Mercedes W12, heads to the pits with a broken front wing

During the moments when Hamilton’s car was off track, F1 race director Michael Masi was observing the situation and listening in on the team radio.

And he was satisfied that the messages being sent to Hamilton, advising him of traffic and where he was in relation to the circuit, meant that his move was done safely.

“What it was, was reversing out of the gravel trap to the edge of the circuit,” he said. “Listening to Lewis's radio between him and his team, they were absolutely advising him all the way through where that was.

“So in that particular circumstance, I wouldn't consider reporting that to the stewards.”

Masi said such incidents are always judged based on the circumstances, so had Hamilton reversed on to the track in a dangerous manner then that would have been different.

“It's a case by case basis, that you need to review the complete set of circumstances that sit around it,” added Masi.

Reflecting on the moments when he was stuck in the barrier, Hamilton said that it took an age for his reverse gear to get selected.

“It just wouldn’t go into reverse so I was holding the reverse button and it took forever to engage,” he said. “I didn’t think it was going to work. I tried reversing and then tried to kind of do a burn out spin to get going again and I was back in the barrier. So then it took a long time again to get back in reverse.

“When I was reversing, I was like, I’ve just got to keep going backwards and work my way out in reverse. And if I hadn’t done that I would probably still have been there now, so I’m grateful for it.”