Lewis Hamilton says being in too much of a rush to get past lapped traffic triggered the off that nearly derailed his Emilia Romagna Grand Prix Formula 1 podium hopes.

The F1 world champion was in a tight fight with Max Verstappen for the lead at Imola as they worked their way through backmarkers on the damp but drying track.

But, as Hamilton dived off line to get past George Russell, he couldn’t slow himself down enough on the damp track surface and ran off through the gravel trap and into the barriers.

The Mercedes driver managed to reverse back on to the track and benefited soon afterwards when a red flag was brought out for the big crash between Russell and Valtteri Bottas.

That allowed the team to fully repair his car and, although he resumed the race down in ninth spot, he charged his way through to finish second. 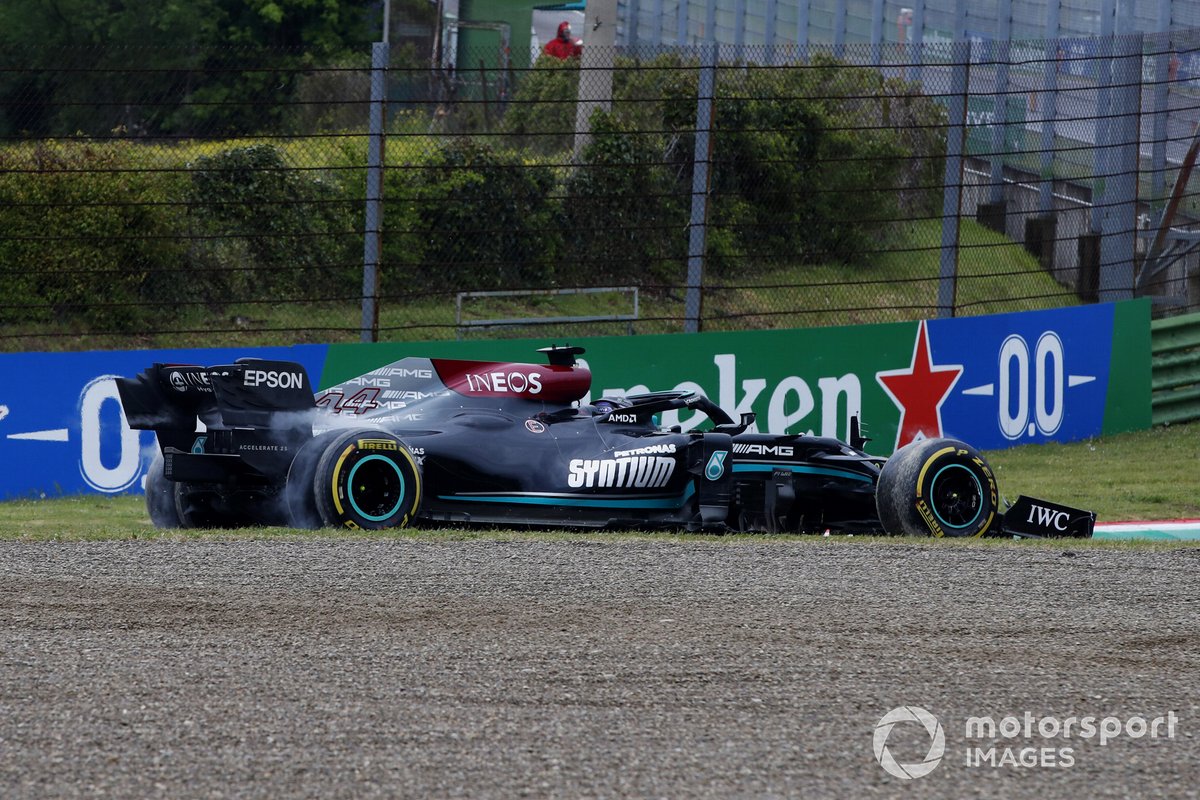 Lewis Hamilton, Mercedes W12, rejoins after an off

Reflecting on his moment at Tosa, Hamilton said afterwards: “There was only one dry line. And I guess I was in a bit too much of a hurry to get by everyone.

“I came into the inside and I could see it was wet. I was trying to stop but the thing wouldn't stop and it sent me off.

“I was a bit unfortunate but I'm really, really grateful that we got to get going again, and to get some points for the team is really important today.”

A non-score at Imola would have gifted rival Verstappen a healthy lead in the world championship, but the bigger picture was not on Hamilton’s mind as he waited during the red flag period.

“I wasn't thinking about it,” he said. “I was just trying to get over the gutting kind of feeling it is when you make a mistake, and just moving on from it and learning from it real quick.

“You don't have time to dwell on it, so that's what I did: got back into racing spirit. I didn't know whether or not we'll be able to overtake, because again offline was going to be wet. But still we had some really good fun battles with all the guys.”

Hamilton recovered to grab second from McLaren’s Lando Norris in the closing stages, and said he was thrilled that his former team was doing so well.

“Firstly, congratulations to Max,” said Hamilton. “He did a fantastic job today and just solid work from him, and also to Lando, what an awesome job. It’s so great to see McLaren back up there.

“On my side, it was not the greatest of days. So, first time I've made a mistake in a long time, but I'm grateful I was able to bring the car home.”