Ricciardo is out-of-sequence on engine usage following failures earlier in the season, and Red Bull team principal Christian Horner said the team has chosen to take the hit at Monza to coincide with the availability of the upgrade.

"Daniel will be incurring penalties at the next race, because he's due an engine change," Horner told Autosport.

"There's a significant amount of cost that's gone into integrating the engine into the car, cooling etc, so if there is any performance, which it looks like there is with our fuel partner, we're happy to take that risk.

"We'll run the engine on Friday, and then make a decision on Friday evening as to whether we retain it."

Verstappen can use a V6 and MGU-H without penalty, with any other change sending him down the grid, but Horner added: "We're aiming to avoid a penalty if possible."

The Renault works team has opted not to use the upgrade, managing director Cyril Abiteboul saying its "couple of additional reliability risks" were too much of a gamble amid the battle for fourth in the constructors' championship.

Horner admits that Monza will be tough even with the new engine, but he hopes it will have a longer-term impact.

"We're not so worried about Monza, but some of the races coming up, like Singapore, Mexico, represent opportunities for us to give Mercedes and Ferrari a harder time," he said.

"If we can gain anything, of course we're chasing every tenth of a second we can."

McLaren has no plans to use the spec C because significant changes would be required to install it in the chassis. 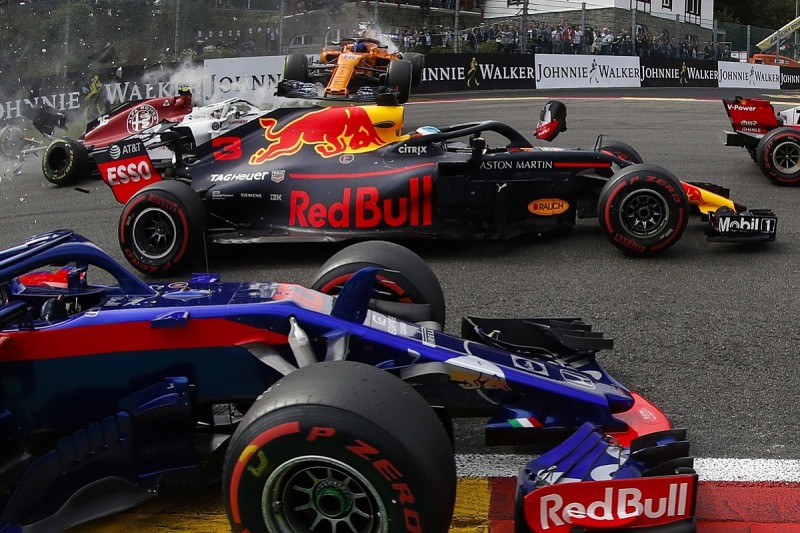 While Verstappen finished third at Spa, Ricciardo was retired when it became clear he had no chance of recovering any points having gone two laps down at the start.

The long Spa lap, safety car and the field being led through the pitlane at low speed opened a window for Red Bull to repair damage that would have usually prompted retirement.

It hoped to only lose one lap, which could have been regained under any later safety car, but after 6m35s in the pitlane Ricciardo rejoined just too late to avoid going two laps down.

"The mechanics did what would usually take an hour in under 10 minutes," said Horner.

"Front wing and rear wing, with all the hydraulic [DRS] lines that are associated with it, it was a fantastic job."

Horner set a deadline to make a call on retiring the car, allowing Ricciardo to save engine mileage and claim a new gearbox for Monza.

"There was a little bit of damage to the floor, so he was losing quite a bit of load," Horner explained.

"But it wasn't too bad, and he was running around at the same pace as [Valtteri] Bottas.

"We were looking at the predictions, I said 'Let's make a decision on lap 30.'

"And we had no chance of scoring any points, the best place finish was going to be 16th, so it didn't make sense to continue."