Vettel lost his third place in the Mexico City F1 race when given a 10-second time penalty for moving under braking while defending against Ricciardo - who was elevated to the podium position after the punishment dropped Vettel to fifth.

Ferrari pushed for the decision to be rescinded, citing new evidence - but in Brazil on Friday the FIA ruled the GPS data it provided had no relevance to the argument so there were no grounds to reconsider the penalty.

While Ferrari indicated it could launch a further appeal, Ricciardo urged it to let the matter drop, and said it should never have been extended beyond Mexico race day.

"To make it go on a week or two weeks after is just dragging it out," he argued.

"After Sunday night, whatever way it goes, it should be done and that's that.

"Obviously there's the fight in the constructors' and every point matters, so from that point of view you can see why they want to keep trying to get those points back.

"But after Sunday's done, once midnight ticks, the next day you move on."

He admitted he had been uncomfortable with having a podium decided by a post-race argument on the day, but added: "I felt it needed to be done.

"It's not that nice to be fighting things out once the chequered flag's dropped.

"It's not what everyone wants to see, but we had our reasons."

Vettel insisted Ferrari was right to keep fighting its corner.

"Of course I support it. We're not happy with the situation," he said.

"We've said it many times: we don't feel that the penalty is justified." 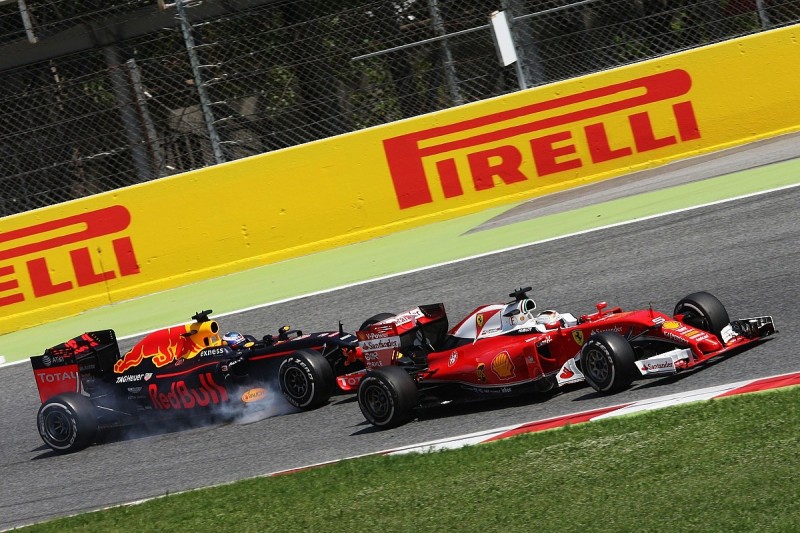 Ricciardo said he would prefer there to be no need to have rules governing defensive driving, adding that he believes Vettel generally races cleanly.

"There has to be some element of drivers' respect, that if you've left the door open and he's made his intention clear, you can't undo your mistake and just try and cut him off," he said.

"If we can all just say 'no one's going to do that', maybe there doesn't have to be so many rules.

"I do think it's uncharacteristic of Seb. He's a hard racer, but normally a fair racer. I don't think he would do it again if the scenario came.

"I told him 'if you covered the inside the whole way, if you stayed on the white line, I'm not going to go on the grass. I'm not stupid'.

"My instinct would've said try the outside. He made the mistake by leaving the door open.

"That's when I was a bit upset, because I'd made the move and now he's thinking 'shit, I should've covered, I didn't, now I'm going to cover' but it was obviously too late."