Jenson Button does not understand why his McLaren-Honda handled so poorly in Brazilian Grand Prix qualifying, as he exited in Q1 while team-mate Fernando Alonso made the top 10

Button was 10th fastest in the second practice session on Friday at Interlagos, but struggled as conditions cooled significantly for final practice and qualifying.

The 2009 world champion was only 17th on Saturday morning, and failed to improve on that position in qualifying.

McLaren swapped Button's engine and gearbox overnight, but the Brit said that should not have caused the oversteer that plagued him all day.

"The car was well balanced yesterday, and today it's a completely different car," rued Button, who said he was "quite happy" this was the penultimate qualifying session before he steps back from racing in F1.

"[I had] massive oversteer at high speed.

"When it's cooler you normally pick up a lot of rear grip, [but] in high speed it's just so on the nose, and then you destroy the rears for the low speed.

"There's no reason why it should be so on the nose - it was like that from the word go this morning.

"It's weird that compared to the other car they were struggling in high speed yesterday, and today they understeered.

"[There is] definitely something awry - the engine, gearbox and suspension were changed, but that shouldn't make any difference.

"It's frustrating because there's no major reason for it as far as we can see. I can't explain it.

"The last six races have been terrible [in qualifying], I don't know why." 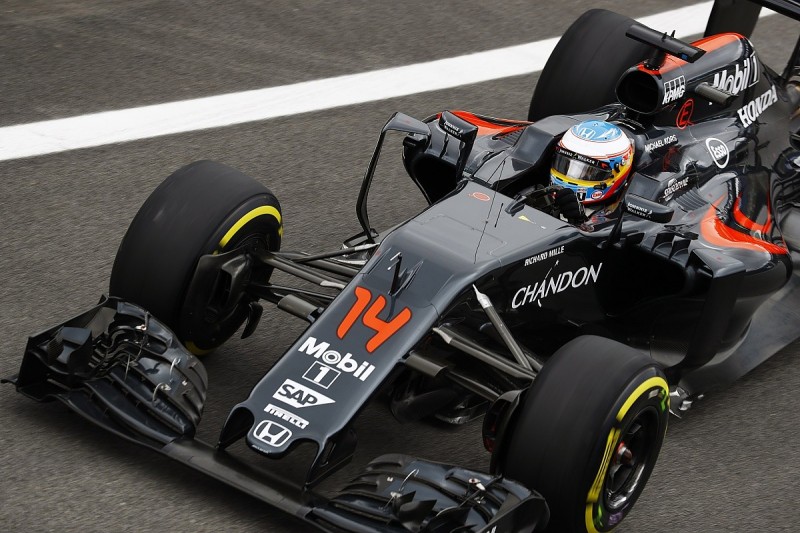 Team-mate Alonso suffered a difficult Friday, which ended with his car breaking down with an ERS water leak, and him briefly operating FOM's TV camera at Turn 3.

He recovered to be 10th fastest in qualifying, ahead of both Williams drivers, and just over a tenth behind the Force India of Sergio Perez.

The Spaniard reckons it will be difficult to keep the Williams pair behind in the race, if conditions remain dry.

"That's a big threat for us," said Alonso, who reckoned his car "behaved fantastically" in qualifying, where he felt the cool conditions suited his overnight set-up changes and driving style.

"It was a bit of a surprise to see both Williams out [in Q2], but I think tomorrow they're very strong.

"In terms of targets for the race it will depend a lot on whether it's raining or not if we are to be in the points.