Sebastian Vettel reckons he "should've been smarter" in his Canadian Grand Prix battle with Fernando Alonso, having stormed from 18th to fifth in the Montreal Formula 1 race

Ferrari driver Vettel ended up on row nine of the grid following qualifying engine problems and a penalty for passing Roberto Merhi after a red flag in final practice.

One of the closest calls in Vettel's charge through the field came when he caught Alonso's McLaren for the second time following an out-of-sequence pitstop.

As they battled for 15th, Alonso's defence left Vettel scrabbling over the kerbs at the final chicane.

"With hindsight I should've been a bit smarter," said Vettel.

"Obviously Fernando was not giving one inch. He defended very well.

"It was close, I touched him with my front right wheel but fortunately nothing happened.

"Second time round I was a bit more clever and just benefited from a better exit because I gave him the dirty line under braking.

"So I had a better radius and more speed on the way out."

Alonso went backwards for much of the race before retiring when running 16th. He said fending off Vettel - albeit briefly - was the only highlight of his day.

"We were so slow compared to them so I tried to defend as much as I could," he said.

"It was one lap and a half but I really enjoyed it. He probably didn't but for me it was the best part." 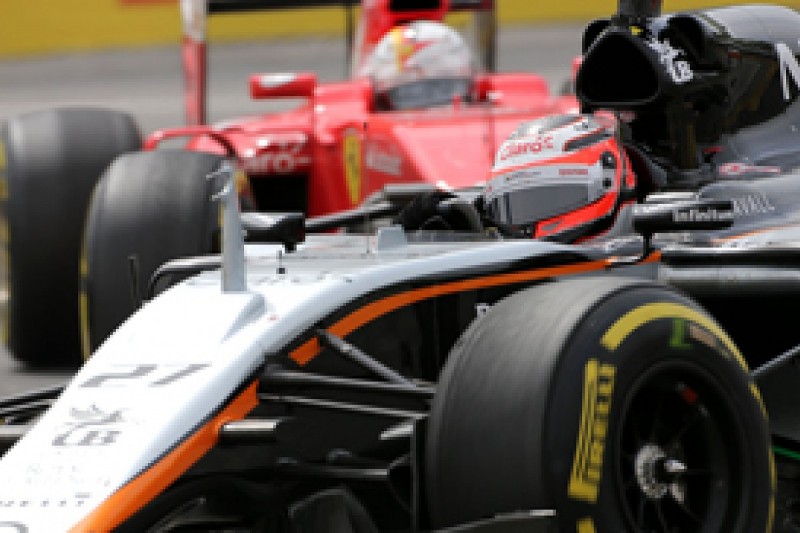 Vettel also had an incident at the same spot with Nico Hulkenberg when fighting for fifth later on. The Force India spun as the Ferrari went around its outside into the corner.

"I was a lot quicker and I didn't really stress too much to prepare the overtaking," said Vettel.

"I was clearly ahead. Then I saw him opening the brakes into the first part of the chicane.

"And that's where I reacted and jumped the second part because if I'd stayed on the track we would just crash."

Although Hulkenberg expressed frustration with Vettel over team radio at the time, he was sanguine after the race.

"In hindsight I shouldn't have tried to defend so hard as I couldn't keep him behind the entire race," he said.

"But when you're a racer you don't just give up your position."

Vettel added that he was satisfied with the outcome of his race given his messy Saturday, but admitted there was room for improvement.

"I would've loved to have had a better opening lap, but there were just no gaps to dive into so I had to sort of wait and start to overtake cars over that," he said.

"We had a great car in the race and the pace just kept coming. As soon as we were in free air we could really progress."