Brawn sold his 2009 championship-winning team to Mercedes, which kept him on as team principal.

Toto Wolff and Niki Lauda were added to the management structure, with Paddy Lowe agreeing a deal to join, and Brawn decided to leave after 2013.

"I was beginning to deal with people who I didn't feel I could ultimately trust; people within the team, who had let me down already in terms of their approach," Brawn wrote in his forthcoming book 'Total competition: Lessons in strategy from Formula 1'.

"Then in early 2013, I discovered Paddy Lowe had been contracted to join the team and it had been signed off in Stuttgart.

"When I challenged Toto and Niki, they blamed each other. I met them to have it out with them. And they both pointed to each other...

"What happened at Mercedes is that people were imposed on me who I couldn't trust.

"I never knew really what they were trying to do. Niki would tell me one thing, then I would hear he was saying something else."

Brawn, who also won titles at Benetton and Ferrari, called the Mercedes situation unlike anything he had previously encountered.

He said at Ferrari he had taken a "conscious decision to have a relationship" with his senior colleagues, but conceded he had failed to do so at Mercedes.

"I couldn't trust these people. And I had also failed...in building relationships with people on the board. I don't know why but I just didn't have the enthusiasm to spend the time in Stuttgart.

"The lack of trust in the Mercedes situation, certainly the hierarchy, was the thing that became disconcerting for me, and the thing that I wasn't used to having to deal with. 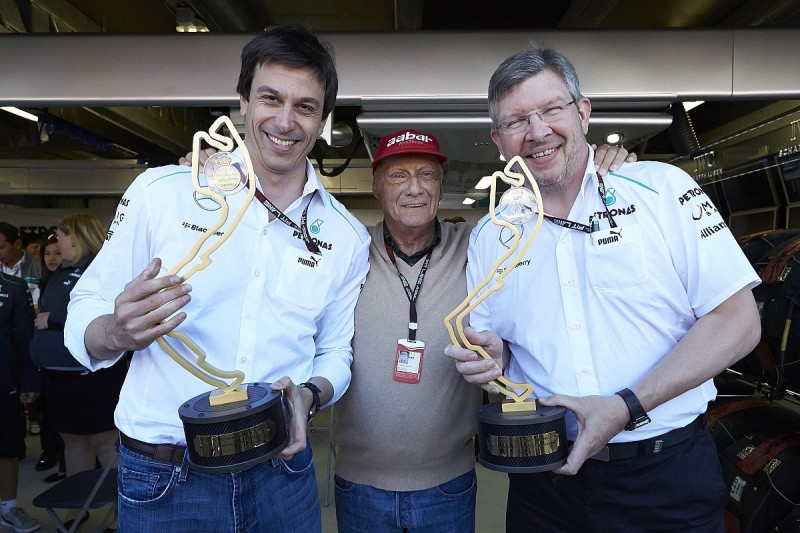 "Now, the reasons we are getting into that situation were probably my own making so I accept that.

"But once that situation was created, I couldn't deal with it comfortably.

"It wasn't what made me motivated or made me get out of bed in the morning."

Mercedes has chosen not to comment on the remarks.

In the book, co-authored with former Williams chief executive Adam Parr, Brawn also revealed he was recently offered a place on the Ferrari board before Luca di Montezemolo's exit.

"I prevaricated, and then, of course, he got into his problems with [now Ferrari president] Sergio Marchionne and it never happened.

"But I spoke to someone else on the board to get their advice and ask how the board was run and what was going on and he said one of the reasons Luca wants you on there is that he trusts you. That was a great compliment."

Total Competition: Lessons in strategy from Formula 1 by Ross Brawn and Adam Parr is out November 3 in the UK