Valtteri Bottas is unsure Mercedes’ innovative dual-axis steering (DAS) device that was banned for 2021 would have solved his Formula 1 tyre struggles at Imola two weeks ago.

Bottas topped both practice sessions on Friday for the Emilia Romagna Grand Prix and said he felt “a lot happier” with the Mercedes W12 car than he did at the opening round in Bahrain.

But Friday proved to be the peak of the Finn’s Imola weekend as he slumped to eighth place in qualifying, while team-mate Lewis Hamilton took pole position, finishing over four-tenths of a second ahead.

Bottas fared little better on Sunday in the race, struggling in the lower-reaches of the top-10 before a crash with Williams’ George Russell brought his race to an early end.

Bottas and Mercedes came away from the Imola weekend citing tyre warm-up issues as being the key to his struggles, causing such a big performance swing compared to Hamilton in the sister car.

Mercedes used DAS through 2020 to allow its drivers to adjust the toe angle of the front tyres from inside the cockpit, assisting with tyre warm-up.

But Bottas did not think the now-banned device would have resolved his issues at Imola, which chiefly surrounded the rear tyres.

“I would say at Imola, the struggles in qualifying, now once we understood everything, it was 100% tyres,” Bottas said.

“My Q1 time would have been enough for the second row in Q3, and I ended up eighth. So it’s an area that we need to pay more attention to. We understand, but it also goes track by track. 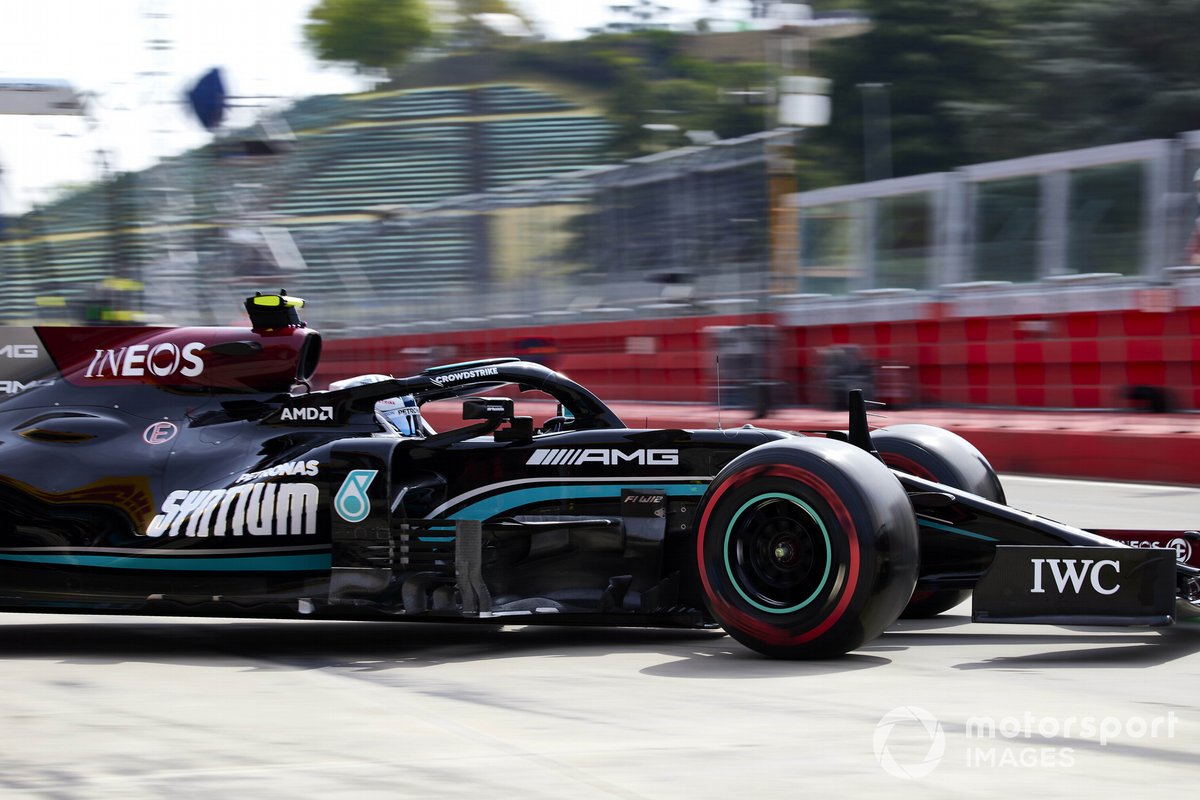 “With the DAS, for sure it was helpful on that, but at Imola, the main issue for me was rear tyres, getting them warm instead of the fronts.

“The DAS system was only for the fronts. I’m sure last year we had some benefits for that, but not necessarily for Imola.”

Mercedes sparked intrigue throughout the paddock when it debuted DAS at pre-season testing in 2020, with the regulations already being written to ban the device for 2021.

Red Bull lodged a protest against Mercedes over the use of the device at the opening race in Austria, only for the FIA to rule it as being legal and within the regulations.

Mercedes heads into this weekend’s Portuguese Grand Prix braced once again for a close fight with Red Bull, the teams having won one race each so far this year.

Bottas felt that it was “impossible to say” how competitive Mercedes would be compared to Red Bull at Portimao given the swings in track characteristics between Bahrain and Imola.

“Bahrain is quite unique in terms of the surface of the tarmac and the overheating issues you get normally, and Imola also completely different, really smooth tarmac and the conditions we had were pretty cold.

“Here, [there are] many question marks in terms of the tarmac. I think it’s evolved quite a bit since last year. You just don’t know.

“The only thing we’ve focused on as a team was first of all getting my car fixed [after the crash], and putting some upgrades in the car and see how it works.”

Russell: No rules of engagement in fighting Mercedes drivers