The Williams Formula 1 team has blamed the wet conditions, compromised set-up and braking issues for failing to qualify higher for the Belgian Grand Prix

The Grove outfit headed into the upcoming two F1 races at Spa and Monza expecting to enjoy its best chance yet of challenging the dominant factory Mercedes cars.

Valtteri Bottas was fastest in dry conditions in the closing stages of final free practice on Saturday morning, but could only qualify sixth in the wet in the afternoon.

Meanwhile team-mate Felipe Massa complained that brake issues hindered his performance, as he wound up a second adrift of Bottas in ninth.

Bottas stopped short of saying Williams could have challenged Mercedes for the front row of the grid, but reckoned his team could have locked out row two in the dry.

"The conditions didn't help. Overall we would have been more competitive in the dry," Bottas said. "Set-up wise everything for us is aimed for the dry.

"We didn't really get a clean out-lap in Q3 and lost a bit of tyre temperature. We still have work to do on the downforce on the car and to get the wet tyres to work a bit better.

"We don't know how much pace Mercedes had left - they were really quick in the wet - but for sure we could have had a go to get the car in top three if it was dry.

"It was possible to be nearer if we'd got everything right, but it was not possible to challenge Mercedes in these conditions."

Massa reckoned he would have been right up with his team-mate but for one of his front brakes 'glazing' early in the session.

"I had two problems," Massa explained.

"First of all, my front-right brake was glazed during the whole qualifying so I was struggling massively to brake in the heavy braking zones. 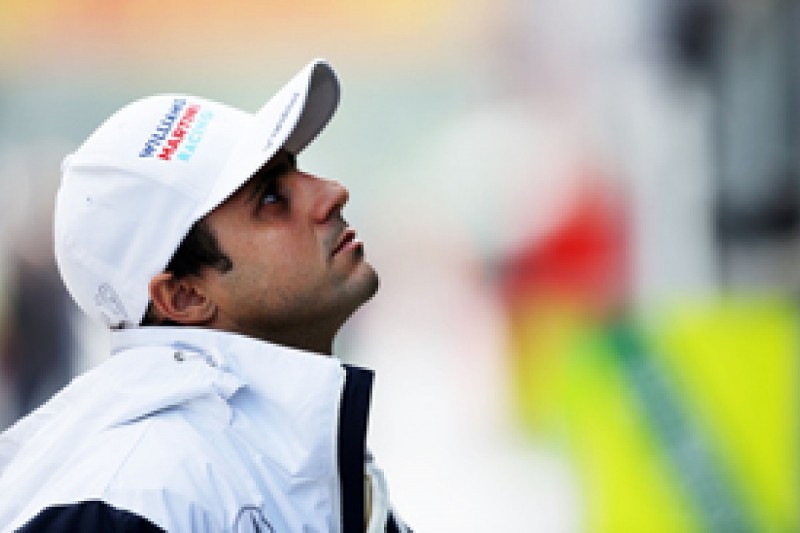 "Then in Q3 I had a lot of traffic so I could not warm up the tyres in the good way, so I started the lap not in good shape and in the last sector I went off the track in corner 17 [Blanchimont] and lost minimum half a second."

Williams vehicle performance chief Rob Smedley admitted Williams should have qualified third and fourth if "everything had gone perfectly to plan".

"Based on yesterday, even if we weren't stunning in the second sector, I think we were right there in that long train from third to seventh," Smedley said.

"We could have been third and fourth, but we're sixth and ninth.

"But you have to look at it from a pragmatic point of view and that was a wet, tricky qualifying session, and we could equally have had both cars 16th and 17th, or 17th and 18th, or one car in the wall!

"We don't have that, so there's positives to take, but you always want more."