At the start of the drag reduction system's tenure in Formula 1, multiple teams attempted to double its fun with novel and complex solutions. Mercedes' version brought the front wing into play, with mixed success before it was outlawed

Many of Formula 1's innovations face, once uncovered, some degree of scrutiny from other teams and the FIA - but on occasion, those innovations are handed a stay of execution if they don't explicitly contravene any regulations.

In 2012, a system introduced by Mercedes was one such innovation, as the FIA cleared what became known as its "double DRS" for use throughout the season.

An addition to the front wing, the double DRS sought to reduce the overall amount of drag produced by the front wing - with a number of modifications that would enhance those properties when the DRS had been activated.

It was a system built on another solution that Mercedes had been working on during the latter phases of 2011, which had previously become known as the "W-duct".

Utilising the hole in the nose primarily used for driver cooling, Mercedes instead diverted the flow into ducts which released the air onto the front wing's underside in a manner similar to the McLaren-designed F-duct from the previous season.

The W-duct was a passive system that triggered at high speeds, trimming drag off by stalling the front wing. 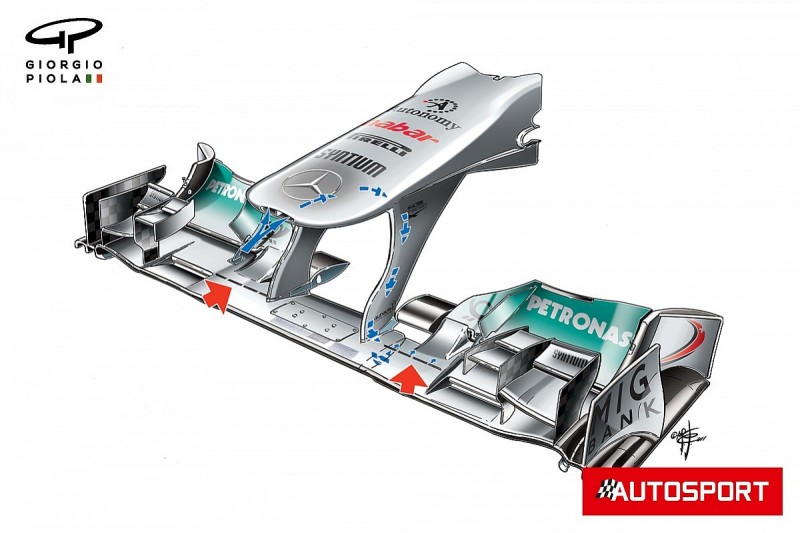 Mercedes had several different front wing solutions available to it at the Japanese GP that year, and Autosport's technical illustrator Giorgio Piola had noted the way the team chose not to lift its new wing design when moving it around the pit box - spending a lot of time outside of Mercedes' garage in an attempt to capture the system.

Piola was able to capture images of the outlets on the underside of the wing when Schumacher's car was hoisted off the recovery truck in Korea that year.

This was fine during qualifying, when DRS use was unlimited but, during the race it could be unsettling.

The solution's existence would be short-lived in any case, as for 2012 the FIA made changes to the regulations that stipulated that the inlet in the end of the nose may no longer be used for anything other than the purposes of driver cooling.

Mercedes' double DRS solution for 2012 took the original 'W-duct' concept and paired it with the DRS by way of the research done by the team on the F-duct in 2010.

Much like the F-duct, it relied on space having been left within the chassis to allow for all of the pipework to be routed - and naturally, the other teams sought to have it banned rather than build their own versions.

The pipework was not only housed within the front and rear wings, but also interconnected both from one end of the car to the other.

It meant that, unlike the W-duct, it was no longer a passive solution and would actually 'stall' the front and rear wing in unison when DRS was deployed. 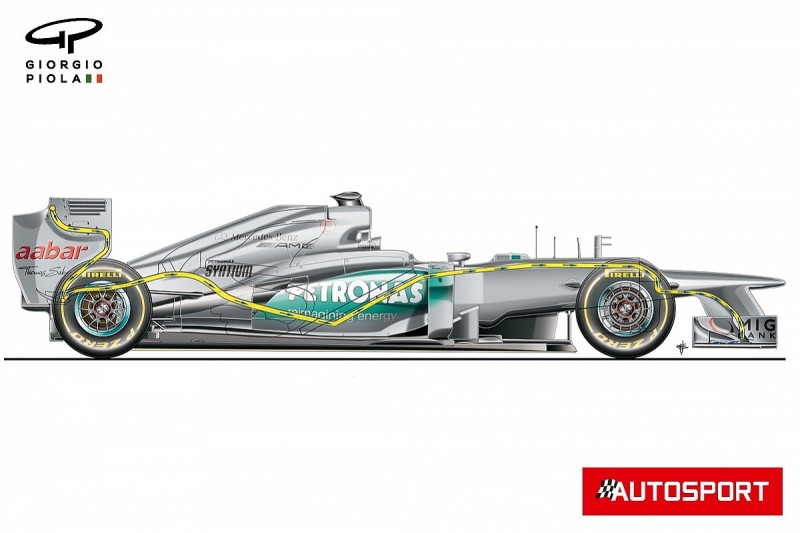 The device was used to great effect at the Chinese Grand Prix in which Nico Rosberg claimed pole by a full half-second, and converted it into his maiden victory.

The FIA declared the double DRS device could only be used for 2012, and Mercedes also quickly realised that it had become an aerodynamic handicap over the season, as it meant the team had less room to manoeuvre in developing its front wing.

This was at a point in F1's history when "flexi-wings" - wings that would flex downwards to move closer to the ground under load - were at their most prominent, a feature that Mercedes was unable to fully exploit owing to the construction of its front wings.

In addition, the team's rear wing endplates had to be a certain thickness, not only to enclose the pipework for the system but also its actuation method for DRS.

Despite those issues, Red Bull saw fit to develop its own version of double DRS, albeit in a slightly different way; introducing a new design at Suzuka, the team used pipework in the rear wing and DRS to stall the lower beam wing too.

Why there’s even more to come from Hamilton yet