F1 championship leader Verstappen set the fastest time of the opening one-hour session with 10 minutes to go as drivers struggled for grip on the streets of Baku.

McLaren's Lando Norris was the first driver out on a hot and sunny track, followed out by Red Bull driver Sergio Perez, and soon most drivers headed out to make the most of 2021's shortened free practice.

After a flurry of installation laps Ferrari drivers Sainz and Leclerc briefly headed the leaderboard on hard tyres, Leclerc vaulting over Sainz with a 1m45.664s.

The pair was soon leapfrogged by Norris and Mercedes' world champion Lewis Hamilton, who used Pirelli's softest C5 tyres to set a 1m45.112s and then a 1m43.893s just before the 20-minute mark.

Drivers were slowly finding speed on a slippery Baku Street Circuit, which hosted its first on-track action in two years after the cancellation of the 2020 race.

AlphaTauri rookie Yuki Tsunoda was the first driver to cause a yellow flag, going straight on in Turn 4 and getting stuck in the run-off area at the halfway point.

Aston Martin's Sebastian Vettel had to take to the escape road in Turn 1 after missing his braking point, while Hamilton, Sainz and Pierre Gasly also had similar offs in Turn 15.

In the second half of the one-hour session Norris and Leclerc found time to settle in the top three, Leclerc just 0.028 behind Hamilton and Norris one tenth shy of the early benchmark. 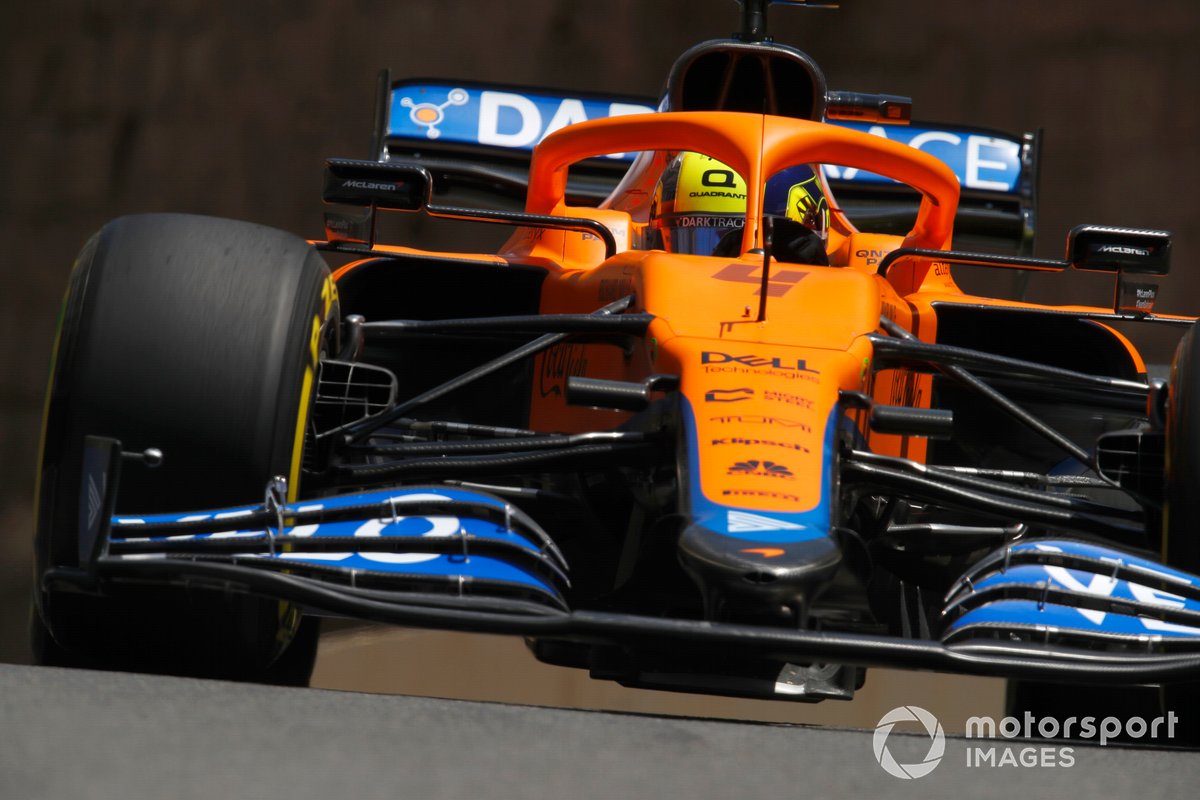 Daniel Ricciardo then went top, putting down a 1m43.732 in the McLaren on softs. Norris was on his way to improving his teammate's time but spun out of the final corner, managing to rejoin safely after briefly pointing the wrong way.

After initially being held up by traffic, Verstappen finally moved up to the lead with 10 minutes on the clock, posting a 1m43.184s on softs.

His benchmark was 0.043s quicker than Leclerc and three tenths faster than Sainz, as Ferrari seemed able to confirm its strong Monaco pace in Baku despite predictions it would struggle to do so.

Perez benefitted from Verstappen's tow to go fourth with a 1m43.630s, one tenth quicker than Ricciardo as the Australian enjoyed a solid showing.

Gasly was sixth ahead of Hamilton, Norris and Alpine's Fernando Alonso.

Valtteri Bottas rounded out the top ten as neither of the Mercedes drivers managed to set a faster time at the end of the session, Bottas going off in Turn 2 on his final time around.

After his early off Tsunoda took 14th, narrowly ahead of Vettel and the second Alpine of Esteban Ocon.

Tsunoda was 18th after his early off, while Haas duo Schumacher and Nikita Mazepin propped up the timesheets. Mazepin made slight contact with the Turn 16 wall after spinning at the end of the session, with Schumacher also struggling for grip.