Reigning world champion Hamilton hit the front early in the session with a lap of 1m04.579s using the soft-compound Pirelli tyres.

Although he did use the ultrasofts Pirellis later on, Hamilton did not improve but had done more than enough to ensure top spot.

Valtteri Bottas slotted into second place early in the session using supersofts, subsequently improving by 0.012 seconds on ultrasofts to end up 0.176s behind Hamilton.

Later in the session, while on his long run on ultrasofts, Hamilton complained of "massive understeer".

Ferrari driver Sebastian Vettel was third fastest, finding just over a tenth of a second after switching from softs to ultrasofts and ending up 0.236s off the pace.

That put him ahead of the two Red Bulls of Daniel Ricciardo and Max Verstappen, who were separated by a tenth of a second.

Kimi Raikkonen was the slowest of the drivers from the big three teams, 0.140s slower than Verstappen.

The Finn struggled to find time on his early ultrasoft laps, which included an off at the Turn 3 hairpin after locking up, but improved later on in his run.

Haas pairing Romain Grosjean and Kevin Magnussen were best of the rest, with Grosjean just 0.164s slower than Raikkonen.

Magnussen escaped from a moment at the downhill Turn 4 right hander when he ran wide into the gravel, and ended up just over a tenth slower than his team-mate.

Magnussen later ran wide in Turn 9, losing some small bodywork parts as a result of the rough ride, and an eventful session concluded with him being told to stop the car immediately after being released from the pits with a loose front-right wheel. 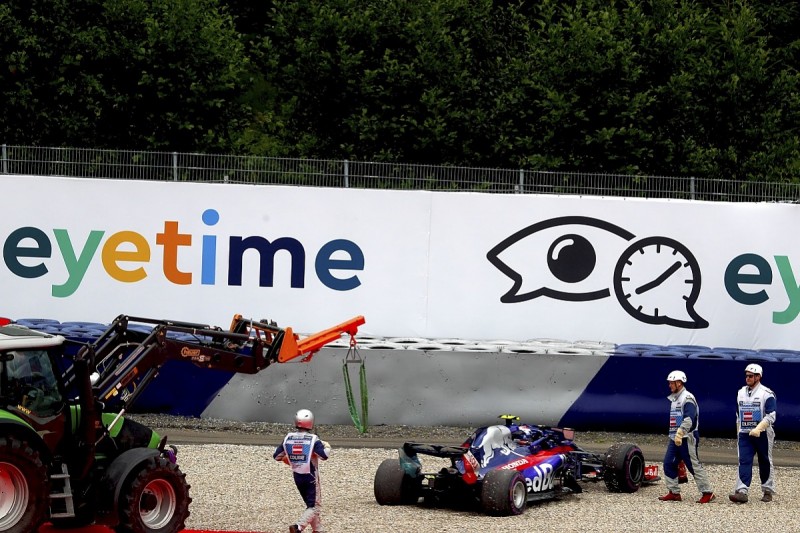 Toro Rosso driver Pierre Gasly was ninth fastest despite going off at the final corner after striking the exit sausage kerb in Turn 9 and deranging the front-left wheel.

He came to rest in the gravel, leading to a five-minute red flag while his car was recovered.

"It was a bit strange, after the first run I felt some vibrations on the front-left and the team checked on the car, everything was fine," Gasly told Sky Sports F1.

"Then at Turn 9 I had a bit of understeer, went on the kerb, and the suspension completely broke there.

"I don't really know why, and it's a bit annoying not to be able to complete the session."

Carlos Sainz Jr was 11th fastest for Renault after surviving a big lock-up into Turn 4 that resulted in a trip through the gravel.

He was around a tenth faster than Sauber's Charles Leclerc, with Force India's Esteban Ocon 13th.

Marcus Ericsson was another driver who ran through the gravel at Turn 3 after a small lockup, but ended up 14th ahead of Renault's Nico Hulkenberg.

Sergey Sirotkin, who sat out the morning session to allow reserve driver Robert Kubica to drive, was 16th fastest.

McLaren driver Fernando Alonso had a difficult session, with damage sustained on his first run leading to a floor change.

He ended the session 19th, ahead only of the Williams of Lance Stroll, suffering an off-track wide moment at Turn 10 with 40 minutes remaining.