The 20-year-old is a protege of both Red Bull and its engine supplier Honda, and is widely regarded as one of the best current prospects from Japan.

Tsunoda finished ninth in the FIA F3 series last year, having scored one race victory in the Monza sprint event.

He moved up to F2 with Carlin this year, scoring a first victory in the Sunday sprint race at the 70th Anniversary meeting at Silverstone.

He took pole for the second Austrian feature race, where he finished second, and also finished on the podium in the first Silverstone feature race.

Honda is keen to fast-track a Japanese driver into F1, and last year two-time Super Formula champion Naoki Yamamoto was given an FP1 session with AlphaTauri, then under its Toro Rosso guise, at the Japanese GP.

However, at 32, Yamamoto is generally regarded as having missed his opportunity to switch to F1, with his younger compatriot Tsunoda emerging as the driver that both Honda and Red Bull would like to promote.

Thus far this year he has had the edge on Carlin team-mate and fellow Red Bull protege Jehan Daruvala, while the prospects of fellow Red Bull junior Juri Vips have been compromised by COVID-19 impacting his ability to race in Super Formula. 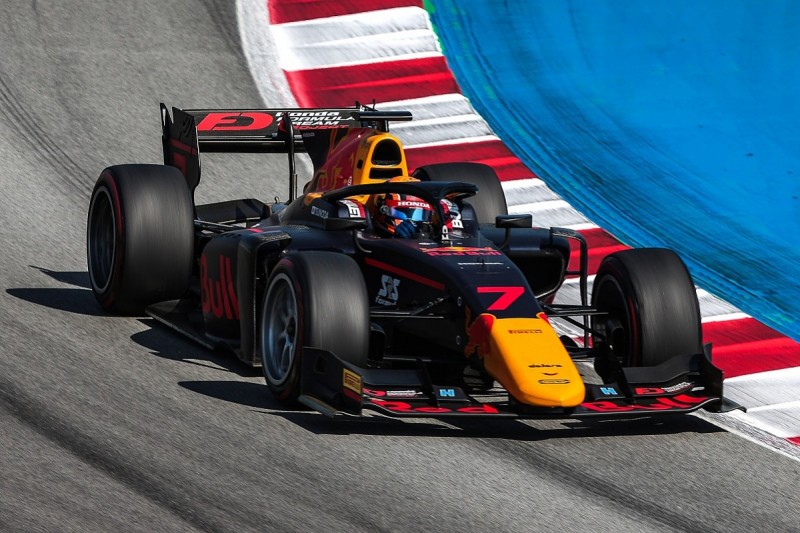 Estonian driver Vips is due to make his F2 debut with DAMS at Spa next weekend in place of the injured Sean Gelael.

Speaking at the Spanish Grand Prix, Tost made it clear that Tsunoda is very much on the radar at Red Bull after recent strong performances.

"First of all, Red Bull and Honda are supporting Tsunoda because he is a fantastic driver," said the Austrian.

"I remember back at the race in Austria in the wet conditions when he was leading the race but then unfortunately because of some radio problems he came in for the tyres too late, for the pitstop too late, and then he finished second. And then in Silverstone he won the race.

"He is also improving his performance. He is becoming more and more experienced and I expect him earlier or later in a car from AlphaTauri, of course."