Formula 1's choice of the 2005 Japanese Grand Prix as its latest race to stream is apt given the recent down-voting of its plans to introduce reversed grids at double-header events this year. Short of using computer simulations, it's as close a case study for what it might look like in modern F1 as there is

The push to implement some kind of reversed grid system in Formula 1 is refusing to go away, even if the latest renewed bid ended in failure.

With the revised 2020 calendar featuring multiple races at the same circuit, it was seen by most as the ideal opportunity to experiment with the format. However, the proposal for a reversed-grid sprint race - in lieu of qualifying - for the second events at Spielberg and Silverstone was ultimately shot down by Mercedes' Toto Wolff, who called the idea a "gimmick".

The case for reversed-grid racing in F1 has been clear for some time. It would add to the excitement and spectacle of a racing weekend, forcing drivers to push for overtakes and fight their way through the field. And there is one race more than any other that supports the argument for reversed grids in F1: the 2005 Japanese Grand Prix at Suzuka.

While we have seen the occasional fight through the field in recent years, it is rare for the majority of the leading drivers to find themselves way down the grid together. But the nature of the 2005 qualifying rules created more potential for this kind of grouping.

Qualifying took place with the cars loading up on race fuel levels and each driver getting one shot on clear track to set a time. The cars went out to set their times in the reverse order of the last race. While the modern qualifying format ensures all drivers get to set times in similar conditions, this was not the case 15 years ago.

By the time Juan Pablo Montoya, Kimi Raikkonen and Fernando Alonso - the top three in Brazil two weeks earlier - went out to qualify at Suzuka, an earlier shower had turned into torrential rain. It left new world champion Alonso 16th on the grid for Renault, with the McLarens of Raikkonen and Montoya behind in 17th and 18th respectively. Michael Schumacher, 14th on the grid for Ferrari, was sandwiched between the Minardis of Christijan Albers and Robert Doornbos. 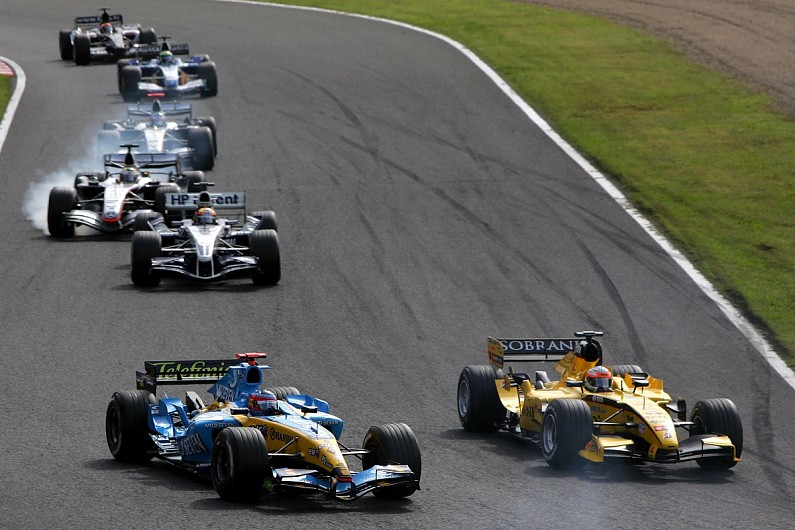 While Alonso had sewn up his maiden title, Renault and McLaren remained embroiled in the fight for the constructors' championship with two races to go. McLaren's 1-2 finish in Brazil had put the team into a two-point lead heading to Japan, but with Fisichella well-placed, Renault fancied its chances of swinging momentum back in its favour.

A messy opening lap allowed both Alonso and Raikkonen - the two stand-out drivers of the season - to make up a number of positions. Takuma Sato and Rubens Barrichello's Ferrari both ran off at Turn 1, while an oblivious Jacques Villeneuve punted Montoya into the wall at the exit of the final corner. Montoya was able to walk away from the big shunt, but the safety car was called with Alonso already up to eighth and Raikkonen 12th.

Alonso struggled to continue his progress on the restart, getting stuck behind Klien. Raikkonen was able to latch onto the rear of his rival's Renault after three passes in three laps, picking off Felipe Massa's Sauber, the Williams of Antonio Pizzonia and Villeneuve's Sauber.

Only John Watson, who had started 22nd for the 1983 US GP West and Barrichello - whose first victory came from 18th at Hockenheim in 2000 - had won from lower on the grid than Raikkonen

Alonso picked up his pace towards the end of the first stint as he burned off fuel, culminating in a spectacular - and at the time, apparently era-defining - pass around the outside of Michael Schumacher at the fearsome 130R.

By the time Alonso dived into the pits to refuel on lap 22, he sat fourth. But after emerging in traffic with a heavy car, Alonso's pace dropped enough to allow the longer-running Ferrari of Schumacher and Raikkonen to get the overcut. The pair came into the pits together four laps after Alonso before rejoining ahead in fifth and sixth.

With Alonso out of the way, Raikkonen quickly set about disposing of Schumacher. A lock-up from the outgoing seven-times world champion at the Casio Triangle allowed Raikkonen to close before passing on the main straight. That became fourth after Ralf Schumacher - the first of the regular pitstoppers on lap 13 - returned to the pits for his second of three planned stops on lap 28. 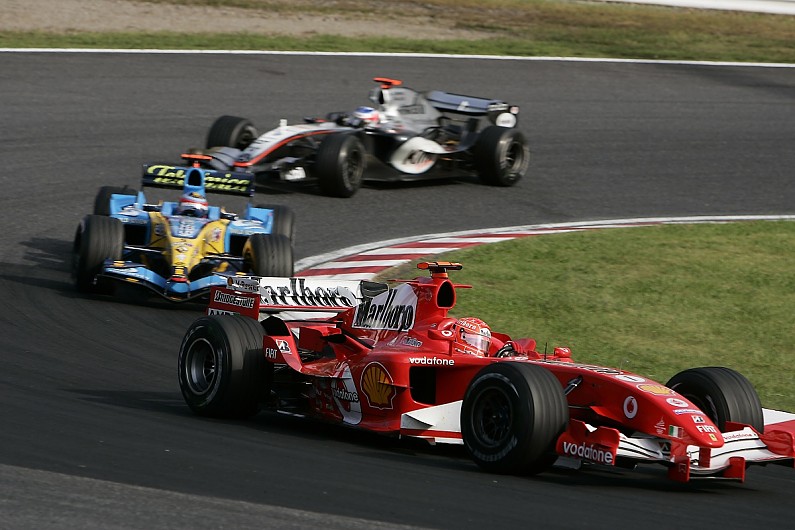 While Raikkonen had Button and Mark Webber's Williams in sight, race leader Fisichella was 20 seconds clear as he neared the end of his second stint, making his second victory for Renault a likely prospect. The Italian pitted for the final time on lap 38 of 53, coming out fourth, as Raikkonen still sat close behind the duelling Button and Webber.

But McLaren had opted to run Raikkonen heavy following his first stop, allowing him to stretch out the stint seven laps longer than Fisichella. It was enough to ensure that, by the time he came in for a late splash-and-dash with eight laps to go, he had not only jumped Button and Webber but was now just five seconds back from the leader.

Raikkonen's charge did not abate entering the closing stages, moving to within one second of Fisichella with three laps to go.

The Finn edged closer before tucking into the Renault's slipstream exiting Spoon on the penultimate lap, forcing Fisichella to cover the inside entering the Casio Triangle. It meant he had a compromised line through the chicane, unlike Raikkonen, who was now on the gearbox of the leader entering the final lap.

Fisichella moved right as they crossed the start-finish line, taking Raikkonen with him as the McLaren picked up the slipstream. A duke left from Fisichella again met a similar response from Raikkonen, who went side-by-side with the Renault before slinging his car around the outside into Turn 1. He was through, and there was no way for Fisichella to respond.

Raikkonen had simply been in a different league, allowing him to cross the line 1.6 seconds clear for his seventh win of the season and from 17th on the grid.

Only John Watson, who had started 22nd for the 1983 US GP West and Barrichello - whose first victory came from 18th at Hockenheim in 2000 - had won from lower. McLaren boss Ron Dennis hailed it as "one of the best team wins we've ever had". 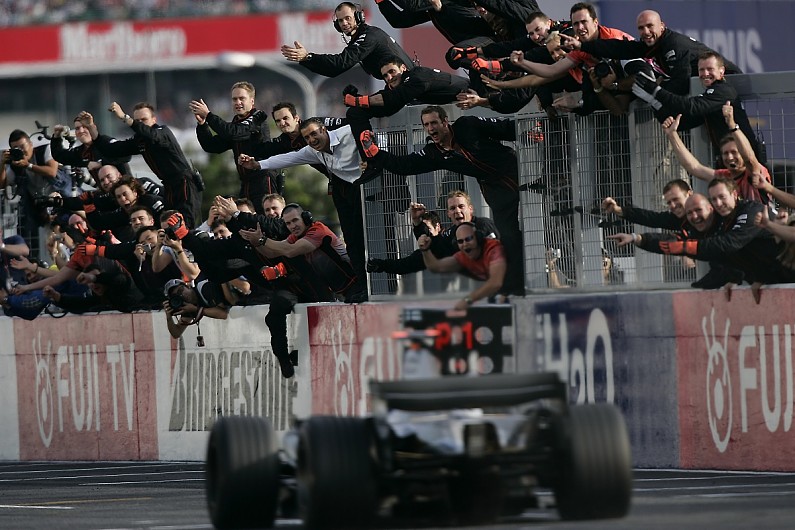 "I think that was one of my best races ever with a lot of hard work, and I really enjoyed myself," Raikkonen said after the race.

"Considering all the problems we have had here to come away with a win is just fantastic.

"There was a lot happening on the first lap and both Juan Pablo and myself got involved, which is often inevitable when you are starting so far down. I was pushing as hard as I could and the car just got better and better.

"After the second stop I had gained enough on Fisichella to go for it, and I did. I got past him on the last lap coming into the first corner, and it was one of those opportunities you have to take."

"The team told me Kimi was close after the last stop, and he caught me up quite quickly - especially when I got chopped by a backmarker into 130R, which cost me a lot of time," said Fisichella.

The race underlined how exciting it could be to see drivers start down the order. Alonso made up eight places on the first lap before pulling off a further six overtakes for position in the race

"He was very fast in the final part of the lap, and I did my best to hold him off, but he held the line into the first corner, and that was that."

Despite losing the race win, Renault came away from Suzuka back in the lead of the constructors' championship after Alonso battled his way through to third place, leaving McLaren to rue Montoya's early exit.

The race underlined how exciting it could be to see drivers start down the order. Alonso made up eight places on the first lap before pulling off a further six overtakes for position in the race. Raikkonen only made five passes, aided by his better fuel strategy, but each one was crucial in his path to victory.

When making the case for reversed grids to be used in some form, Suzuka '05 is the strongest example there is. After all, moments such as Alonso's 130R pass on Schumacher or Raikkonen's last-lap move on Fisichella are what F1 thrives off.

But so long as there is opposition to the proposal, we look set to only enjoy such fights through the field when outside factors come into play - something the current rulebook and strong reliability does little to encourage. 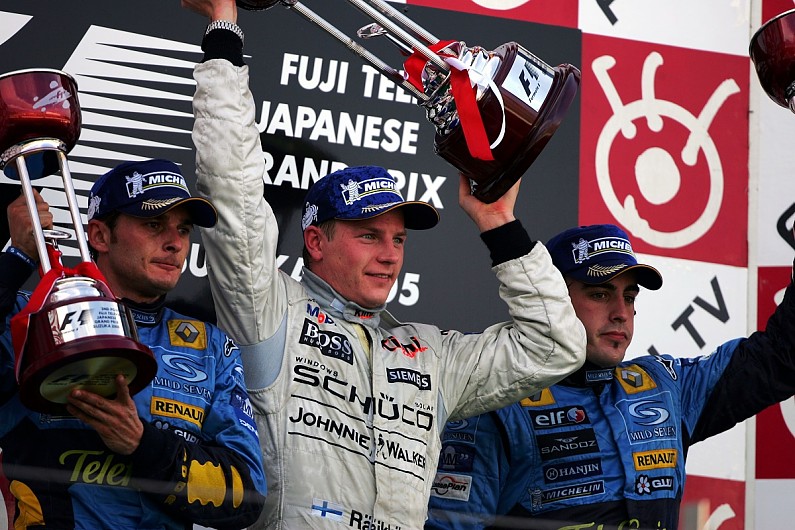