Mercedes has unveiled a number of new updates for its home Formula 1 race at Hockenheim, including a new turning vane assembly, front wing and bodywork.

Teams' bargeboards and turning vanes next to the sidepods increase in complexity over the course of the season, and Mercedes has worked its way through numerous aerodynamic packages in this area so far in 2019.

For the German Grand Prix this development has continued, and Mercedes has seemingly come up with a completely different design compared to the previous turning vane assemblies.

Throughout the season, the team has run with four distinct turning vanes, all interlinked and ending at the final turning vane - which loops around the top of the sidepod.

Mercedes has now switched to a less conventional design, featuring a trio of horizontal slats which resemble a Venetian blind (green arrow) - not dissimilar to the current design run by the Haas team.

This pairs up with a new mounting arrangement for the final turning vane, shifting the bottom mounting further upwards and curling the top mounting to attach to the underside of the horizontal section. 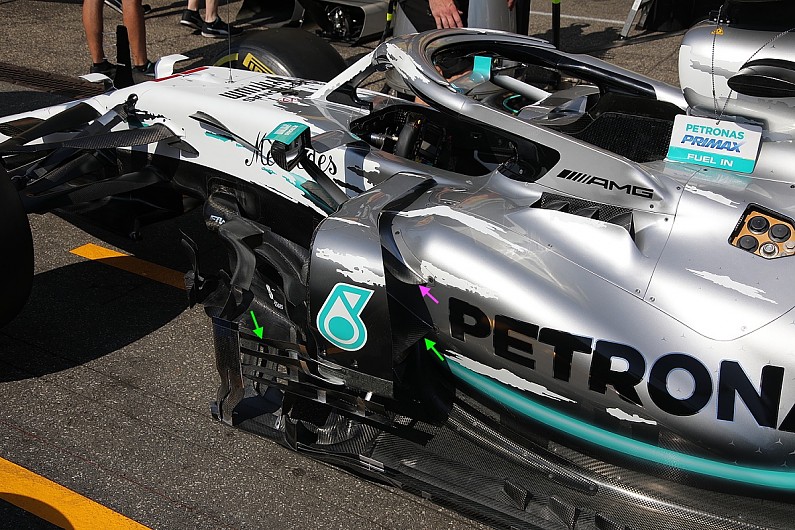 It is unknown why Mercedes has made the switch, but it could be out of the desire to send more airflow around the sidepod undercut towards the rear.

The previous specification of turning vane worked in a similar manner, as the turning vanes featured horizontal extensions sweeping rearward with a curved shape.

It seems that the effect of these has been noted and expanded upon, and the first element - which remains similar to the previous arrangement - collects any wake turbulence from the wheel and hands it over to the new horizontal pieces.

The design also seems to be a solution to link up more strongly with the bargeboard package, which sends airflow outwards to protect the floor from turbulence.

Furthermore, the movement of the mounting points - marked with purple arrows - gives the car greater opportunity to manage airflow over the top of the sidepods, allowing it to wash down over the indent.

Although much of the focus at the front of the car was on the Mercedes anniversary livery, celebrating 125 years of motorsport, the front wing has also been updated - as can be seen from Giorgio Piola's image below. 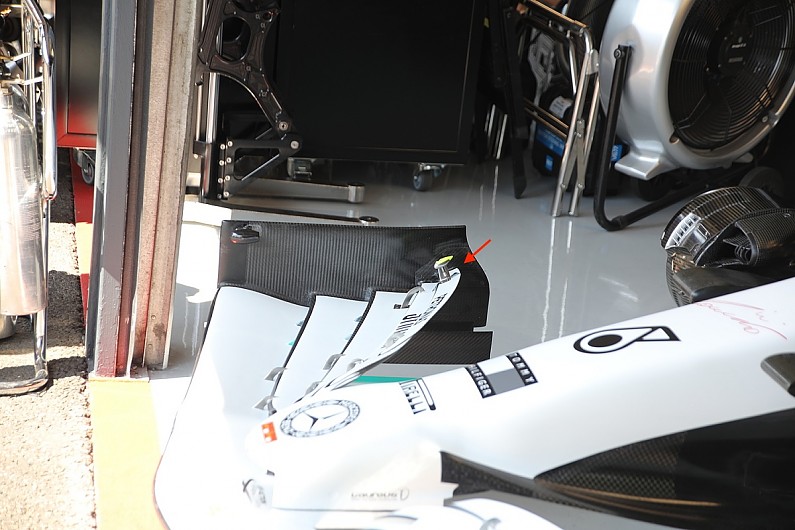 The position of the trailing edge was a controversial one earlier in the season, protruding from the current specification of endplates debuted in China and posing a puncture risk.

Although this was changed at the behest of the FIA, Mercedes made a minor tweak to the design for the following rounds to ensure it could fit within the bounds of the endplate.

The footplate now also features a small flick, suggesting a more concerted effort from the aerodynamicists to deflect airflow outwards.

At the rear of the car, the bodywork has been marginally opened out to assist with cooling - giving Mercedes the platform to avoid the problems with heat it suffered in Austria.

There are also new rear-wing endplates, featuring a stepped trailing-edge corner cutout and a number of new fins - marked by the yellow arrow. 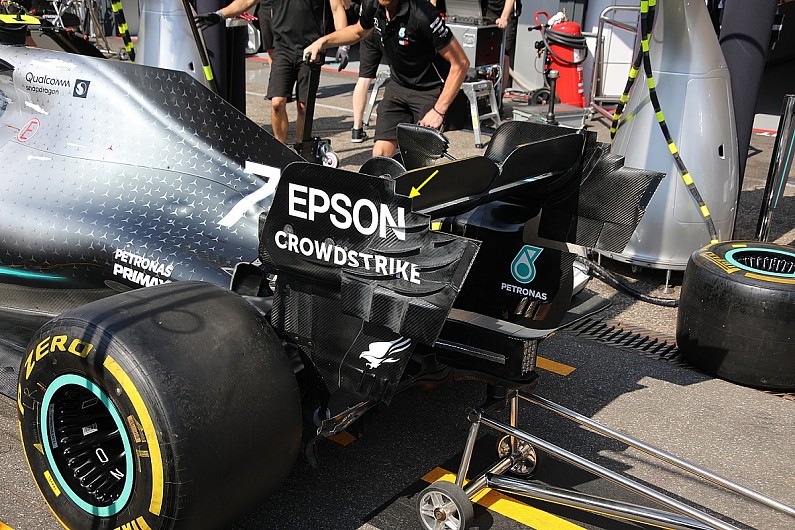 Rear wings produce tip vortices, which can often be seen in humid conditions as the water vapour in the air condenses, and the new design direction will be a new adaptation to control those vortices.

In doing so, the pressure generated at the rear of the car can be redistributed, developing greater suction underneath the wing elements and improving downforce incrementally.