Toro Rosso-Honda's Daniil Kvyat delivered a phenomenal late lap to set the fastest time of Formula 1 pre-season testing at Barcelona, while the Williams lapped for the first time.

Alfa Romeo driver Kimi Raikkonen had led the morning session, and it looked like his early time would hold for the day until just over 10 minutes to go.

Kvyat had tried to beat the benchmark a few minutes earlier and jumped into second, before going one better.

The Australian had focused on long runs on the C2 tyre as he took over the car from morning runner Nico Hulkenberg, but still pumped in a rapid lap to secure third place.

While the late runners battled, the Williams remained in the pits having completed 23 laps in the hands of George Russell.

The car didn't arrive at the circuit until 4am, and wasn't ready for the morning session.

Russell set a best time of 1m25.625s, and that lap came with a huge slide at the entry to the final chicane, which threw the car into the run-off area.

Sebastian Vettel didn't improve on his morning time as he focused on longer runs throughout the session and by the end he was sat in the pits as others went for the top times. The Ferrari completed 134 laps.

Max Verstappen helped his Red Bull team to rebound from its difficult day when Pierre Gasly crashed the Honda-powered car on Tuesday afternoon.

The team completed 109 laps, with Verstappen setting his best time on the C3 tyre in the morning - the same tyre Vettel used to finish one spot ahead.

Hulkenberg held sixth with his morning time, ahead of Romain Grosjean's Haas - which stopped three times during the day. 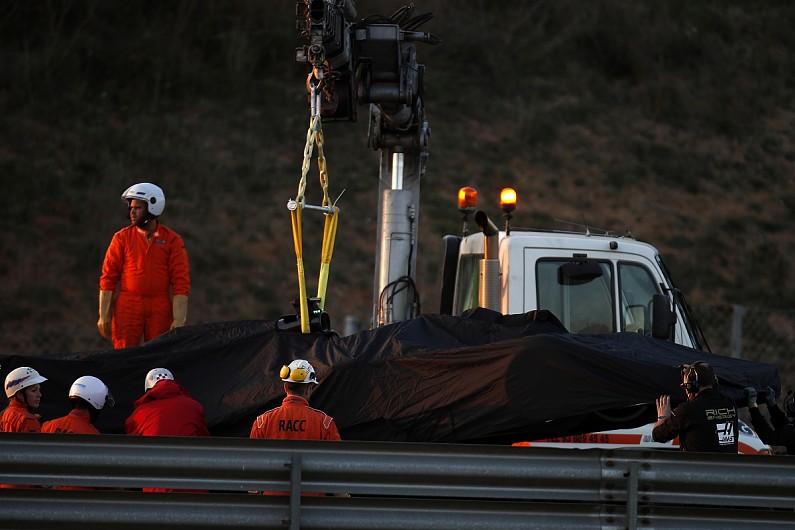 Pietro Fittipaldi was the first Haas man to stop on track, before Grosjean halted at the start and end of the afternoon session, the latter bringing out the red flag and costing teams four minutes of running.

Fittipaldi took eighth behind Grosjean, after his second consecutive session in the car, while McLaren elected not to fit the C4 tyres to its car for a late lap as it had done the previous two days.

The team appeared later than most in the morning, completing 90 laps, and Carlos Sainz Jr ended the day ninth.

Sergio Perez rounded out the top 10 for Racing Point, on another day where it lacked the number of completed laps of most of its rivals.

The two Mercedes, headed by morning driver Valtteri Bottas, set 11th and 12th fastest times but, in typical fashion, conducted long runs. The champion team is still to use the softer C4 tyre in anger, having run on the C1, C2 and C3 so far.

Bottas and Lewis Hamilton did combine for the highest number of laps for any car, on 182 laps finished.

Russell rounded out the order for Williams.