Red Bull team boss Christian Horner believes the 2018 Formula 1 season could have looked "quite different" if his cars had an extra 40kW of power.

Max Verstappen and Daniel Ricciardo won two races each in 2018 and Verstappen scored more points than anyone except world champion Lewis Hamilton after the summer break and should have recorded back-to-back wins in Mexico and Brazil.

Red Bull will switch from Renault to Honda engines next year in pursuit of the power and reliability it believes it needs to fight for world championships for the first time in the V6 turbo-hybrid era.

Asked by Autosport how much Red Bull needs from Honda to have its late-2018 form throughout next season, Horner said: "It's always easy to say ifs, buts and maybes, but if there'd have been another 40kw [roughly 53bhp] in the back of the car, the season could have looked quite different.

"Hats off to everybody in Milton Keynes for producing arguably one of our best ever chassis.

"When you look at the other users with the same engine [the Renault works team and McLaren], there is a world of difference."

Red Bull had use of Renault's latest-spec engine for the final races of the season but still claimed that Honda's equivalent engine, introduced for the final few grands prix of the season, had lifted the Japanese manufacturer ahead in the pecking order. 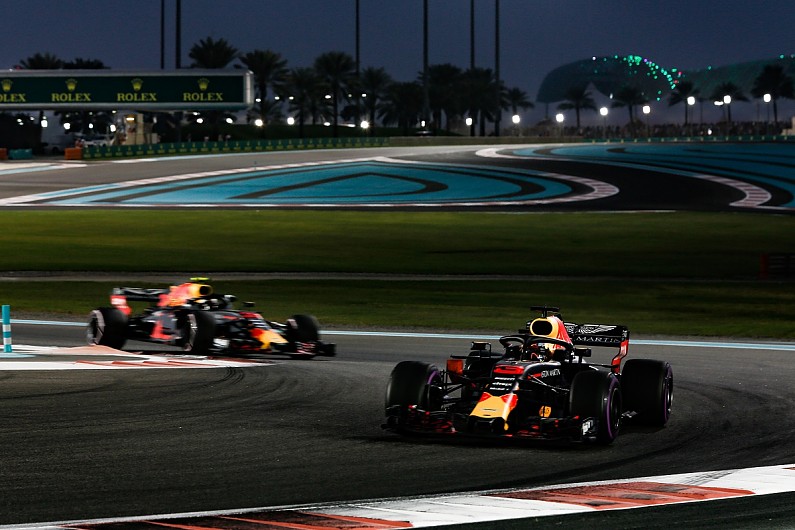 Asked what would happen if the 2019 season started with the four engine manufacturers - Mercedes, Ferrari, Renault and Honda - at the level of performance they ended '18, Horner replied: "We'd certainly be an awful lot closer.

"What we see and hear in the pipeline as well - pieces of paper are one thing, the stopwatch ultimately never lies."

Honda ended the season on a low note as Pierre Gasly, who will move from Toro Rosso to Red Bull next year, suffered failures in qualifying and the race in Abu Dhabi last weekend.

Brendon Hartley retired from the British GP after a hasty rebuild was not completed in time and, after he missed the start, Honda spotted an anomaly on the data on his out-lap.

Horner said he was not concerned by Honda's Abu Dhabi failures because "the trajectory is going the right way".

He suggested the multiple setbacks Red Bull has suffered with Renault meant Honda did not need perfect reliability to be an improvement.

"Reliability isn't something we've had," he said. "We've had 11 or 12 retirements this year.

"If we can achieve the power and the reliability [of the big teams], Lewis Hamilton had one DNF this year, likewise with Sebastian [Vettel].

"That's the rate we have to be aiming to achieve."