Lewis Hamilton believes his impressive Formula 1 form over one lap this season is down to him making a small adjustment, and reining in his attacking approach to qualifying.

The Mercedes driver has claimed 10 pole positions to team-mate Nico Rosberg's one this year, a stark contrast to 2014 when the score was 12 to seven in Rosberg's favour.

Hamilton has pressed home the advantage of starting in clear air, securing six victories and four other podiums to leave him 36 points better off than at this point last year.

"You are always adjusting and trying to improve," Hamilton, whose 48 career poles is 17 short of his hero Ayrton Senna's tally, told AUTOSPORT. "It's never ending.

"I will always drive well no matter what but you have to keep working at it.

"This year, it has been a little tweak in qualifying, a small tweak, but it's worked.

"It's not like I was a disastrous driver in qualifying. I was always quick in qualifying, but it was a bit more attacking back then."

Hamilton conceded 2014 was a "mentally trying" year as he suffered reliability issues and clashes with Rosberg both and off the track.

But this season, the car has been close to bulletproof - both drivers have finished in the points in every race this season - and Hamilton is revelling in the confidence a second world title has given him. 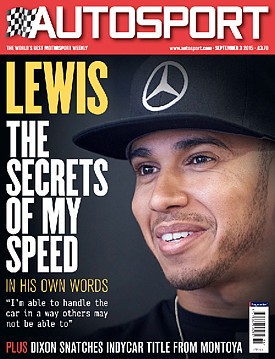 "Last year was a difficult year. I was a little bit unfortunate with some scenarios. It was a very mentally trying year.

"This year, I have just been able to enjoy driving. If anything, it has made it better.

"I don't feel that intensity when it comes to the race weekends. I don't feel any pressure.

"I know more than ever what I am capable of."

Read more from Lewis Hamilton on the secrets of his speed in this week's edition of AUTOSPORT, out on Thursday.