McLaren-Honda Formula 1 driver Jenson Button has revised his ambitious pre-season target of winning a race this year, as he believes even a podium is now unlikely.

McLaren has struggled for both reliability and performance in 2015 and currently sits ninth in F1's constructors' championship, ahead of only Manor, with just 17 points.

Progress has been made, with Fernando Alonso scoring the team's best result of the season with fifth in Hungary before the summer break.

However, last Sunday's Belgian Grand Prix was a reality check, as Button and Alonso finished a lap down despite a major upgrade to the Honda engine.

Why Honda's new engine is a letdown

When reminded of his pre-season comments, Button said: "I think the aim is getting both cars in the points. A podium? It's unlikely.

"For us, you have to think our best race is going to be Singapore; it's a slow-speed circuit with low-speed corners which we're very strong in.

"So that's probably the race where we will pick up the most points I should think." 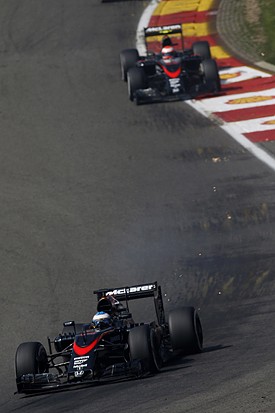 Alonso echoed his team-mate's thoughts and added the remainder of the season was still important for McLaren in the context of ensuring 2016 is more productive.

"In the remaining races, we need to score and maximise every opportunity," he said.

"But if it doesn't come, we don't need to get frustrated.

"Despite the results, good or bad, we need to focus especially next year's car and use the remaining races as a test.

"We are trying to increase the performance, which is not good enough in terms of the power unit, aero stuff and mechanical grip.

"There are still many things we have to put in place to be competitive and fight for world championships.

"Monza will probably not show the progress we saw in Hungary, when we were more or less in the top 10.

"But hopefully we can see something similar in Singapore and the following races.

"For future races and next year things will look pretty different."