Fernando Alonso gave Ferrari its first victory of the 2013 Formula 1 season as his tactic of starting on soft tyres proved the right one in a strategy-defined Chinese Grand Prix.

Kimi Raikkonen and Lewis Hamilton used the same strategy to fill the podium, as Sebastian Vettel's tactics could only give him fourth place, just inches behind Hamilton in a thrilling finish.

Alonso quickly thrust himself to the front of the first group. A slow start from Raikkonen meant the Ferraris were into second and third by Turn 1, and both Alonso and Felipe Massa overtook Hamilton on lap five as the Mercedes' soft tyres faded quicker.

Massa stayed out one lap longer than most on softs and subsequently faded out of the lead battle, while Alonso's speed at hacking through traffic on alternative strategies once he was on mediums gave him a clear advantage over everyone else on the same strategy.

Vettel left his softs until the final five laps.

But by then, Alonso's strategy already looked better. The Ferrari's shorter stints meant Alonso caught Vettel on track on lap 42 on fresher tyres at a time when both had one more stop to go.

Alonso swiftly passed the Red Bull and cruised away, knowing Vettel would still have to take on softs.

While the Ferrari was out of reach, Vettel still had a shot at Raikkonen's Lotus and Hamilton's Mercedes, which had been battling all race.

The champion caught his two rivals at a rate of three seconds per lap after his late pitstop and started the final lap with Hamilton in sight.

The Mercedes hung on by just 0.2 seconds, with Raikkonen staying just far enough ahead to claim second. The Lotus was sporting a dramatic tear in its nose section after an early brush with the defensive Sergio Perez's McLaren.

Jenson Button pulled off a two-stop strategy in the sister McLaren, allowing him to lead for a spell and finish fifth ahead of Massa.

Paul di Resta and Romain Grosjean were eighth and ninth.

Nico Hulkenberg played a major role in the early stages. Running the same strategy as Vettel, he got ahead of the Red Bull early on and led as the pit tactics unfolded.

A slow pitstop meant he lost out to Vettel, and Sauber's choice of a very short middle stint on softs did not pay off, leaving him 10th. 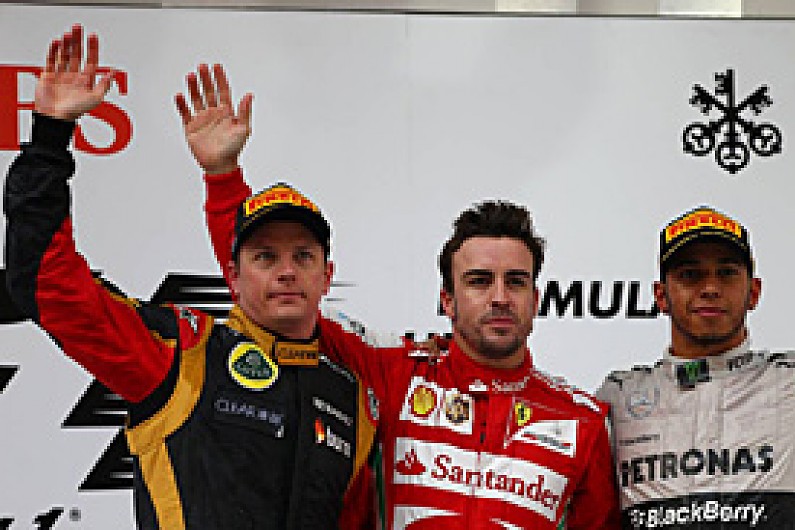 Mark Webber's troubled weekend got even worse in the race. Clearing the soft tyres on lap one and instantly taking mediums gave him a shot at getting up with the leaders, but he smashed his front wing in a tangle with Jean-Eric Vergne's Toro Rosso then retired when his right rear wheel fell off after a subsequent pitstop for repairs.

Nico Rosberg was troubled by an apparent suspension problem from the outset and retired his Mercedes soon after his second pitstop.

A host of drivers, including both Red Bull men, will be investigated for alleged DRS breaches after the race, although AUTOSPORT understand that paddock-wide telemetry problems are the cause.

Esteban Gutierrez could face sanction for ploughing into the back of Adrian Sutil early on, ending both their races. Sutil had earlier clashed with Force India team-mate di Resta.