Did the 24 Hours of Le Mans Virtual justify its biggest sim-race ever tag?

OPINION: The eagerly-awaited 24 Hours of Le Mans Virtual was not without its problems and controversies, but firmly achieved its primary objective of entertaining action-starved fans and increasing anticipation for the real thing in September

With 200 drivers, including Formula 1 champions and Le Mans winners, competing remotely from 37 different countries many considered the 24 Hours of Le Mans Virtual to be the biggest sim racing event not only since the postponement of real-world motorsport due to the COVID-19 pandemic, but since racing began in the virtual world.

Following its announcement in May, expectations sky-rocketed with each passing driver and team reveal. Two-time F1 champion Fernando Alonso was entering a team with 11-time grand prix winner Rubens Barrichello and current F1 stars Max Verstappen and Lando Norris would once again be teaming up for sim racing behemoth Team Redline.

Ferrari's F1 team-leader Charles Leclerc headlined the GTE entry list, which featured the might of the factory-backed Porsche outfit - combining the German's strongest assets from the real and virtual worlds - as well as factory Aston Martin and Corvette entries too.

It came as little surprise that many considered the entry list for the 24 Hours of Le Mans Virtual to be superior to its real-world counterpart. Stars of the real and virtual world from every corner of the globe and every discipline of motorsport came together in a 50-car field of identical LMP2 prototypes and GTE machinery equalised by a Balance of Performance.

But could a race with such high expectations justify the pre-race excitement and investment of so many drivers, teams, engineers, organisers, and partners while also going some way to filling the gap left by the postponement of the real-life 24 Hours of Le Mans? 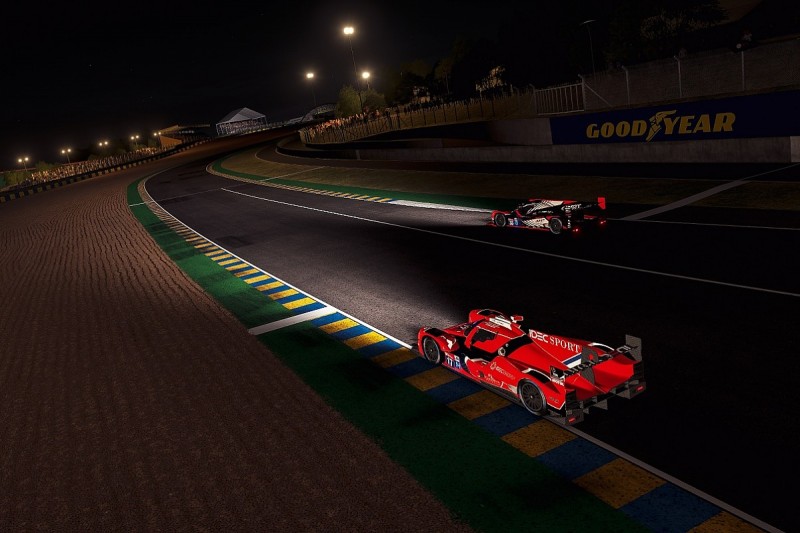 The first potential hurdle to a thrilling sim race was inevitably going to be a chaotic start, which had the potential to wipe out many of the star names just moments into a 24-hour race and had concerned many drivers prior to the race. The practice races had seen mixed results, but the actual race start was almost entirely incident-free for both classes, meaning there were multiple fights for position throughout the field rather than drivers attempting to navigate through the chaos.

Although there were fears prior to the race that the inexperienced drivers would cause havoc, it was actually two-time Le Mans winner Alonso who was among the first drivers to make a mistake with sizeable consequences. Alonso inadvertently turned his ORECA 07 LMP2 car across the front of Simona de Silvestro's Porsche at Tetre Rouge and ended up skating through the gravel, earning himself a one-second stop-go penalty for the incident.

That penalty was issued just as the Spaniard entered the pits for a fuel stop, and the game forced him to serve his penalty without taking on the fuel he needed. Inevitably, he ran out of fuel on the very next lap. Alonso was out, or so it seemed.

Reinstating the Alonso car did nothing to detract from the race and only ensured there would be more eyes on the event, where fans of those drivers might otherwise have switched off

The #14 car would have been permanently retired had it not been for red flag issued for a server crash five hours into the race, at which point the event organisers made the controversial decision to allow the car back in, six laps down to match the final LMP car still running.

The decision was met with a mixed reception, with some slamming the decision to re-instate a car that had already retired - Alonso himself had left his simulator and set off on a lengthy bike ride. However, it was somewhat of a harmless balancing act, compensating for the earlier unfortunate timing of the issuing of the penalty, which Alonso described as "a combination between human error and a game glitch."

With the car already six laps down in a 30-car LMP field, there was little hope for the quartet earning any significant result. Sure enough, Alonso/Barrichello car would go on to finish only 17th, some eight laps down on the winners.

As with the re-instating of Verstappen and Norris' Redline entry for the final hours of the race, following the Dutchman's technical issues while leading in the 10th hour, it did nothing to detract from the show and only ensured there would be more eyes on the event, where fans of those drivers might otherwise have switched off. 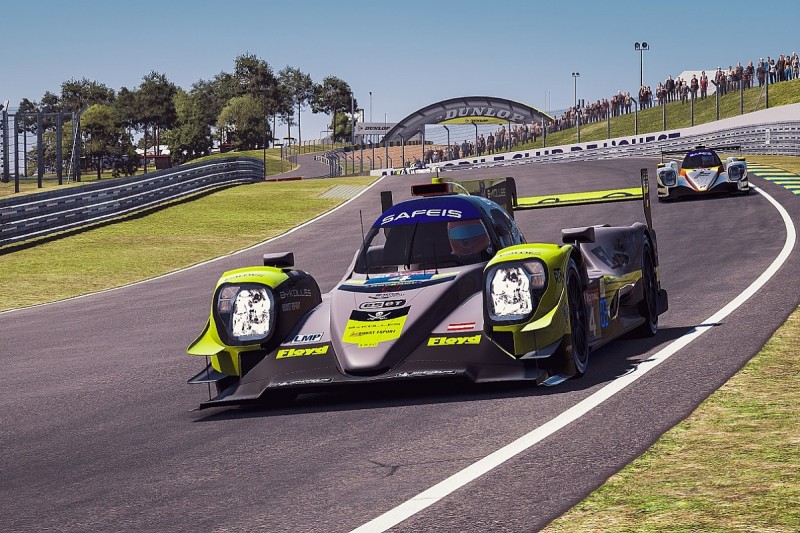 It is one of the advantages of the virtual world that simply would not be possible in the real-world equivalent. And arguments of favouritism are null and void too, as all the cars that dropped out were invited to return under the second red flag, meaning there was no special treatment for its top entries.

Many of those top motorsport stars, including Leclerc, immediately expressed an interest in racing in the real-life 24 Hours, and an event like this highlights the potential of what the real-world race could achieve without schedule conflicts.

The typical F1-Le Mans calendar clash was even replicated in the virtual world, with F1 bizarrely insisting on holding its final Virtual Grand Prix in the evening following the end of the 24 hours. Subsequently Leclerc and Norris decided to skip the final Virtual GP to focus on preparation for the Virtual Le Mans.

Avoiding this is something many fans will hope Liberty Media will factor into its future plans, as the likes of Leclerc, Verstappen, Norris and Pierre Gasly crossing over to Le Mans is can be beneficial for both series. One only has to look at the reaction to Nico Hulkenberg becoming the first active F1 driver to win the 24 Hours in 2015 - taking a seat that had originally been earmarked for Alonso - to appreciate the buzz created in both paddocks.

Another crossover possibility signalled by the virtual Le Mans was the return of Team Penske for the first time since the 1971 edition of the race, it's all real-world driver line-up featuring reigning IMSA champions Dane Cameron and Juan Pablo Montoya, who was attempting to complete his triple crown effort in the virtual world. The quartet struggled for pace en-route to a 27th place finish, but still provided a fascinating storyline of going against the majority with its driver choice.

Reigning Indy 500 winner and 2011 Le Mans runner-up Simon Pagenaud proved to be the team's star asset, not only setting the 35th fastest lap out of the 120 LMP drivers - quicker than a lot of the virtual world experts - but performing a remarkable mid-stint simulator switch and losing a minimal amount of time.

Pagenaud wasn't the only one to triumph against adversity, with ByKolles sim driver Jesper Pedersen having to drive two laps with a steering wheel in 'zero-mode'.

"He had to steer right to go left, and visa versa," explained team-mate Tom Dillmann.

"We had to connect another driver to replace him but it took two laps until I could connect to the server and take over from him, so he had to drive two laps turning right to go left. It was incredible that he managed to do that and only lose around 20 seconds a lap and bring the car back in one piece."

While it was a shame to see some of the event's top names face technical issues, unreliability is omnipresent in Le Mans whether that be mechanical failures in the real-world or server-related woes in the virtual editions

Injured IndyCar racer Robert Wickens, a late addition to the race in the #67 Mahle Racing Team Aston Martin, was another to hit trouble when his adapted simulator supplied by CART race-winner Max Papis became stuck on 100% force feedback. The car still managed to finish in 17th place, one spot ahead of the #52 Ferrari Leclerc shared with fellow F1 racer Antonio Giovinazzi, which crashed with 20 minutes of the race remaining while Lecerlc was behind the wheel.

Such stories of drivers heroically overcoming adversity is exactly in keeping with the spirit of the real-life race and, while it was a shame to see some of the event's top names face technical issues, unreliability is omnipresent in Le Mans whether that be mechanical failures in the real-world or server-related woes in the virtual editions.

The postponement of all real-world motorsport has left a hole in the lives of everyone involved in the industry. Almost every championship has attempted to fill that gap with their own sim racing events, with varying degrees of success.

The Virtual Le Mans managed to encapsulate that once in a year feeling of the real-life event with this virtual race and, although not without problems, it felt like a fitting climax to over three months of intense sim racing action as real-world motorsport begins its gradual return in Europe, with 15 cars starting the 24 Hours of Portimao at the Algarve Circuit last weekend.

Nothing can replace or intimate the prestige and history of the real-life Le Mans, however, the inaugural 24 Hours of Le Mans Virtual was its own thrilling standalone historic motorsport event that has only heightened the excitement for the real-life Le Mans to return in September. 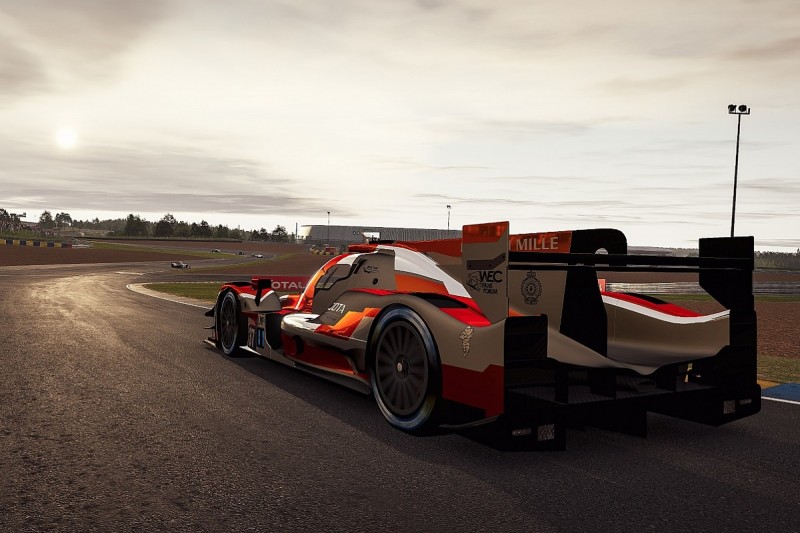 Analysis: How the real-life racers performed in the Virtual Le Mans 24 Hours