Vandoorne started the race with a quadruple stint in the virtual LMP2 car, which he shares with WEC regular Norman Nato and sim racers Eamonn Murphy and Tomek Poradzisz.

The car was able to join the lead battle following a red flag period for a technical issue, and Vandoorne jumped the polesitting ByKolles car in the pitstops.

That ByKolles car, in the hands of sim racer Jesper Pedersen had recovered from early-race dramas, which involved ex-Formula E driver Tom Dillmann picking up a drivethrough penalty for jumping the race start.

However, Pedersen's simulator failed temporarily and the ByKolles team was forced to overcome further lost time.

Redline's five-time iRacing champion Greger Huttu enjoyed spells at the front of the field and was at one point engaged in a thrilling three-way battle for the lead with Vandoorne and Pedersen. 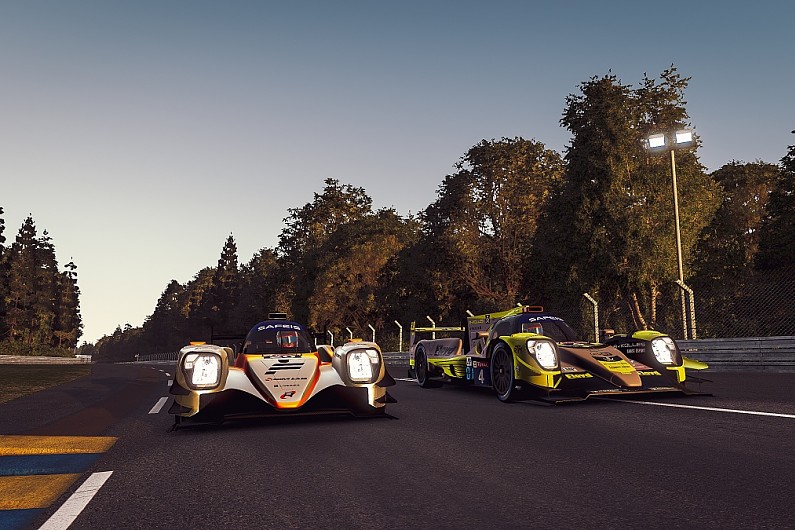 Huttu handed the Redline car over to Verstappen, while Vandoorne allowed Murphy his first stint at the wheel of the #16 Veloce machine as the virtual night fell.

Verstappen was able to eat into Murphy's sizeable race lead that Vandoorne had built up, but lost time in a bizarre pitlane incident.

The #51 Ferrari GTE misjudged the entry into its pit box and ended up obscuring Verstappen's exit from the pits, who eventually exited but collided with the #21 Axle Motorsport entry - which features ex-F1 driver Alex Yoong.

Verstappen recovered and ran within two seconds of the race leader but may face an investigation for an unsafe release.

The 2 Seas Motorsport car is in fourth place sandwiched between the #13 and the #01 Rebellion Williams Esports entries.

Team Penske's sole entry lost a significant amount of time when Simon Pagenaud's simulator steering wheel broke, he made a quick replacement but ran 22nd at the end of eight hours.

Following a red flag period, Fernando Alonso and Rubens Barrichello's car was allowed to restart the race after Alonso originally ran out of fuel in the first hour and retired. It sat in 27th place and six laps down.

Porsche Esports Supercup Joshua Rogers set a series of fastest laps to give the #93 Porsche a dominant lead in the GTE class.

Charles Leclerc spun his Ferrari from second to third place just moments after he had emerged from the stepping into the virtual car for the first time since the opening stint.

The #91 Porsche further demoted Leclerc to fourth place and ensured a 1-2-3 for the German manufacturer.

Romain Grosjean's Esports team was fighting for a podium place prior to a collision with the LMP2 of Katherine Legge, who was recovering following a spin at the second chicane on the Mulsanne Straight.

She received a one-second stop-go penalty for an un-safe rejoin and the all-female #50 Richard Mille Racing entry ran 23rd at the end of the eighth hour.