International motor racing has made its European post-COVID-19 return at the venue that hopes to host a revived Formula 1 Portuguese Grand Prix later this season.

The 24 Hours of Portimao took place successfully over Saturday and Sunday at the Algarve International Circuit, albeit with a small field of 15 cars - well below what is normally expected from the Creventic-run 24 Hour Series for which it qualifies.

Creventic loyalist Herberth Motorsport took a 1-2 finish with its pair of Porsche 911 GT3-R contenders, although it was the less-fancied car that stepped up to take honours after the machine of twin brothers Robert and Alfred Renauer, Ralf Bohn and Daniel Allemann lost over an hour to a gearbox change on Saturday evening.

The only other GT3 car, the HTP-Winward Motorsport Mercedes-AMG GT3, took pole position in the hands of Philip Ellis and led the first nine laps with Indy Dontje at the wheel, but lasted only a couple of hours before it was shunted by Bryce Ward.

That meant that Tim Muller was able to cross the line in the slower - but untroubled - Herberth Porsche, shared with Marco Seefried, Jurgen Haring, Michael Joos and Taki Konstantinou, to take victory over the sister car by 26 laps.

Third overall went to the only untroubled car from the Porsche 991 Cup class, with Jeroen Bleekemolen leading the driving strength for Muhlner Motorsport, accompanied by Carlos Vieira, Moritz Kranz and Tom Cloet. 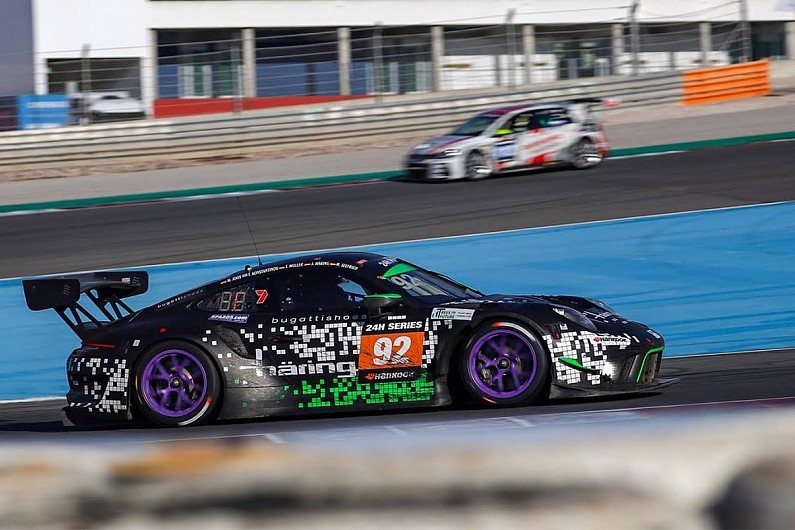 With neither of the two GT4 entries making it beyond Saturday evening, the main focus of attention was on the battle in the TCE class for TCR touring car machinery.

The opening stint featured a massive all-Dutch dust-up lasting over an hour between Tom Coronel in the Comtoyou Racing Audi RS3 and Rik Breukers in the Red Camel-Jordans Cupra, with former British Formula Ford champion Antti Buri closing onto their tails in the lead Autorama by Wolf Power Volkswagen Golf.

The Cupra, which Breukers shared with his brother Luc and father Ivo, was first to fade from contention and finally retired with engine failure with six hours remaining.

That left a cat-and-mouse duel to the end of the race between the Audi and the Golf, with Yannick Mettler in the Golf finally putting a lap on Nicolas Baert in the Audi in the closing stages.

Mettler and Buri shared the class-winning Golf - which took fourth overall - with Miklas Born, Kari-Pekka Laaksonen and Roberto Ferri, while Coronel and Baert were joined in the Audi by Le Mans 24 Hours regular Nathanel Berthon.

This meeting follows NASCAR, MotoAmerica Superbikes and IndyCar in America as the first international racing events to take place since the coronavirus pandemic took hold of the world.

F1 is set to return on 5 July with the first of two back-to-back races in Austria, while MotoGP is due to get underway at Jerez in Spain on 19 July.