Team Redline's Max Verstappen crashed out of the lead of the 24 Hours of Le Mans Virtual as a result of suspected technical issues shortly before the 10-hour mark.

Red Bull Formula 1 driver Verstappen, along with his Redline team-mates Lando Norris, Greger Huttu and Atze Kerkhof were consistently in the lead battle for the rFactor 2 endurance race, which was organised by the World Endurance Championship, Automobile Club de l'Ouest and Motorsport Games.

At the eight-hour mark, Verstappen picked up damage to his virtual LMP2 car in a bizarre pitlane incident when he collided with the #21 Axle Motorsport entry, his exit from his pit box having been obscured by the #51 Ferrari GTE car.

Verstappen re-joined the race in second place and took the lead when the #16 Veloce car - which has Mercedes Formula E driver Stoffel Vandoorne among its driver line-up - made an unscheduled pitstop.

But Rebellion Williams Esports' #1 entry, with Mercedes factory GT ace Raffaele Marciello at the wheel was able to rapidly close on the wounded Verstappen and was within a second when the Redline driver's sim suffered a series of technical issues which resulted in his car crashing into the barriers through the Porsche Curves. 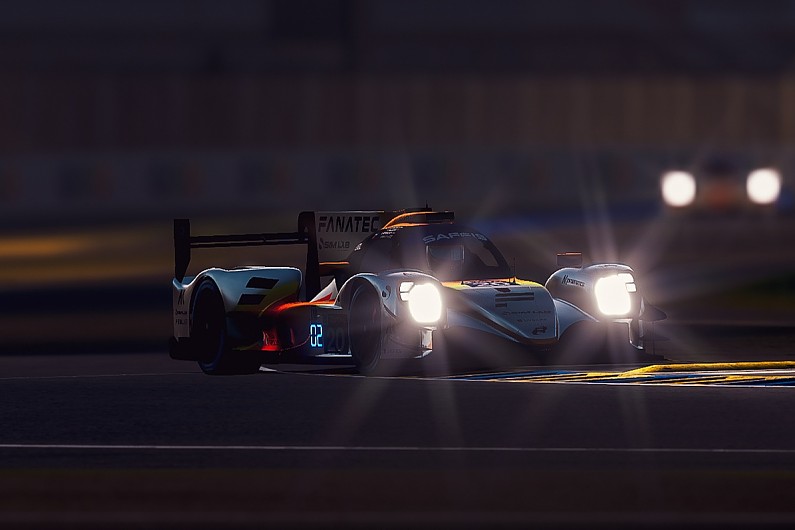 Verstappen pitted for repairs and then handed over the Redline entry to Kerkhof, who began his attempted charge to return to the top 10.

Norris tweeted: "Incredible... leading the race after 10 hours, and it ends just like that.

"Game bugs and it's pretty much over. We'll keep fighting and see what we can do."

The GTE class was been dominated by the #93 Porsche, with Norwegian sim racer Tommy Ostgard driving the latest stint.

The sister #92 and #91 factory-backed Porsche cars maintained the manufacturer's 1-2-3 at the 10-hour mark.

Ferrari F1 racer Charles Leclerc suffered a nightmare second stint in his Ferrari 488 GTE, as he spun out of second place shortly after exiting the pitlane.

The Monegasque was then hit with a multitude of technical issues that left his car - now in the hands of Antonio Giovinazzi - running last at the hour mark.

You can follow all of the action live on Autosport and Motorsport.TV.