Audi GT3 star Kelvin van der Linde became the first repeat winner of the 2021 DTM season with a lights-to-flag win in the first race at Zolder on Saturday, as Red Bull’s Alex Albon finished on the podium.

Having been cruelly robbed of a victory with a technical problem in the previous round at the Lausitzring, van der Linde enjoyed a trouble-free run in Belgium to extend his lead at the top of the championship.

At the start of the race, the South African resisted the advances of a fast-starting Marco Wittmann - who had dispatched the Mercedes of Maximilian Gotz for second - to hold the lead into the opening set of corners.

His closest points rival Liam Lawson, however, wasn’t as lucky, with a slow start from 10th on the grid firmly dropping him to the lower regions of the midfield. That meant when the Red Bull-backed driver tried to avoid the melee that ensued at the chicane, he was unlucky to be rear-ended by the Mercedes of Arjun Maini, bringing his race to an abrupt end.

A prolonged safety car followed, before the action resumed with a rolling start on lap six.

Van der Linde again came under serious pressure from the Walkenhorst BMW of Wittmann, the two-time champion nearly drawing alongside the South African as they navigated the first corner. But van der Linde had the inside line going into Turn 2, allowing him to retain the lead of the race.

The two dived into the pitlane at the same time on lap seven, rejoining the field nose-to-nail. However, Wittmann was passed on cold tyres by the HRT Mercedes of Vincent Abril - who had stopped a lap earlier - bringing his battle with van der Linde to an early end.

Wittmann went on to lose more places when Rockenfeller and AF Corse Ferrari driver Albon got the jump on him with an overcut, the duo also leapfrogging Abril in the process.

This paved the way for a three-way fight for victory, with van der Linde leading Rockenfeller and Albon as they pulled away from the rest of the field.

Albon had the freshest tyres of the trio but was unable to find his way past Rockenfeller to attack the other Abt Audi of van der Linde, despite the race being extended to make up for the lost time under safety car. 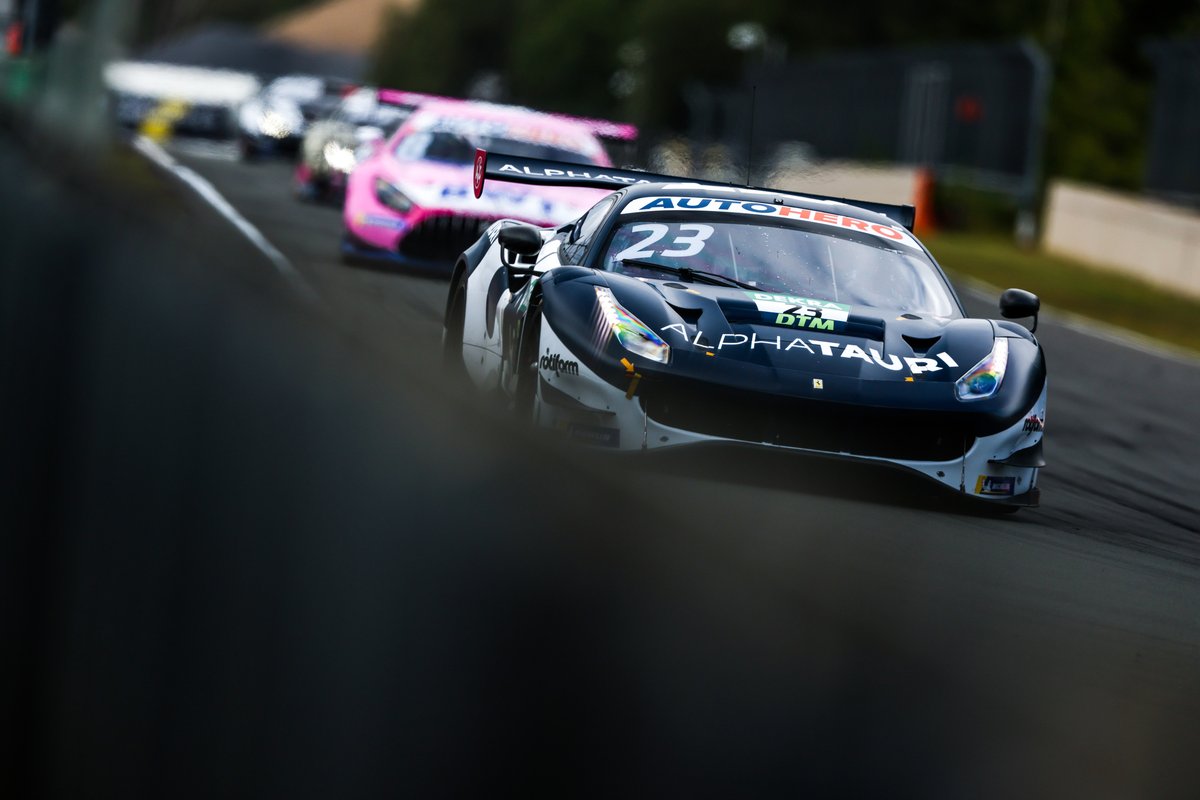 That meant the South African was able to claim his second victory in the DTM in five starts, with 2013 champion Rockenfeller completing a 1-2 for the factory-supported Abt team.

Third place marked Albon’s second podium in the DTM, having been retrospectively awarded third place at Monza following Abril’s disqualification from the season-opener.

Behind the leading trio, Abril finished fourth after successfully holding off Wittmann, while team-mate Maximilian Gotz was unable to take advantage of a front-row start, slipping to sixth at the flag.

Ex-Formula 1 driver Christian Klien (JP Motorsport) finished 12th on his and McLaren’s debut in the DTM.