Rast, who won Saturday's opening race despite stalling from third on the grid, set a 46.146s lap time with 30 seconds left on the clock to head an Audi top-four lockout.

Most drivers had only set banker laps by the time the session was red flagged after five minutes when BMW driver Timo Glock stopped exiting the chicane.

That stoppage also prompted a split in strategies, as a handful of drivers opted to head out immediately when the session restarted following a five-minute delay while others held station in their garages.

Race one polesitter Nico Muller was one of those to head straight back on track, and immediately beat Loic Duval's early benchmark with a new best of 46.264s.

Jamie Green got closest to that initially, lapping just 0.060s slower, before Muller then found more time to extend his narrow advantage.

Green then went quicker still as the session approached its conclusion, setting a 46.153s that appeared to be good enough for pole - even when Muller matched that time.

But Rast struck late to secure his third pole position of 2019, beating Green's previous best by a mere seven thousandths. 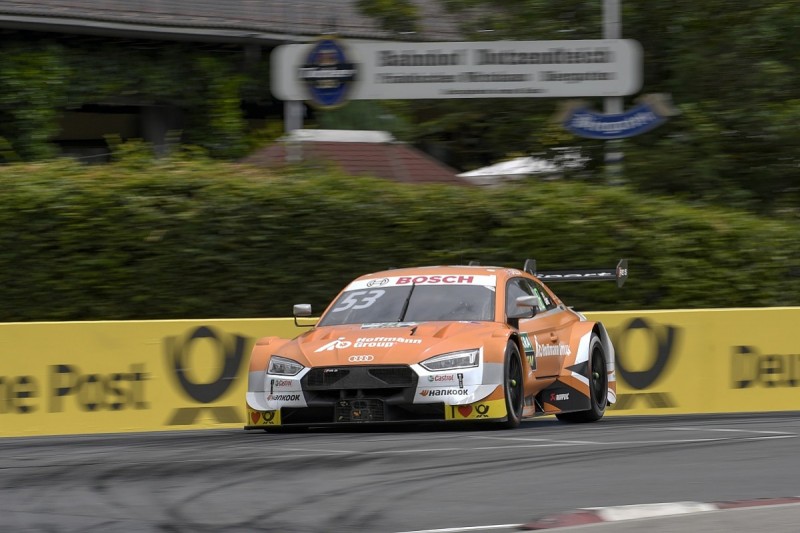 Green was provisionally second ahead of Muller, but he, sixth-place qualifier Mike Rockenfeller and Jake Dennis were later relegated five places for not respecting the red-flag procedure.

Muller will therefore start second ahead of Duval, while Phillip Eng will be BMW's lead representative in fourth after qualifying just 0.046s away from pole.

A pair of BMWs were next up in the order; Bruno Spengler will start fifth ahead of Sheldon van der Linde, while Green slots in ahead of Marco Wittmann.

The customer WRT Audi of Jonathan Aberdein and Robin Frijns complete the top 10, with Rockenfeller 11th.

Ferdinand Habsburg got his Vantage ahead of the second WRT Audi of Pietro Fittipaldi, while Glock - who was not able to register a representative time before he stopped - will start 17th ahead of Dennis.