The RBM BMW driver ran second to polesitter Timo Scheider for the opening handful of laps, but used his DRS to take the lead from the Abt Audi at the hairpin on lap six.

The Brazilian, who had started on the newly-introduced option tyres, stopped for the first time on lap seven while the safety car was on track and then spent the middle section of the race out of position as a host of different tyre strategies were employed.

He crucially overtook Daniel Juncadella for fifth spot at the Spitzkehre shortly after he had pitted for the final time.

That then became the lead when the cars ahead of him made their final stops.

The surprise of the race came from Dirk Werner, who started 20th, stopped under the safety car and then ran an ultra-long middle stint on the option tyres - which proved far more durable than expected - and emerged in second after his final visit to the pits.

Vietoris, who dropped from third to 11th on the opening lap, ran a similar strategy to Werner's and passed Paffett using DRS inside the final 10 laps. Like Werner's his result was the first time he had made the podium in a DTM race.

Paffett held off champion Bruno Spengler - with whom he had earlier banged wheels several times heading into the Mercedes Arena - for fourth.

Scheider's victory hopes ended when the safety car was brought out early on to allow Adrien Tambay's smoking Abt Audi to be cleared away from the side of the track.

He stayed out for one extra lap compared to his rivals and dropped to 19th as a result. But he was able to climb to sixth by the finish, aided by a sensational move on Joey Hand's BMW around the outside at the Sachs Kurve.

Scheider was the best-placed Audi with Mike Rockenfeller eighth. Marco Wittmann and Roberto Merhi each took their first DTM points in ninth and 10th. 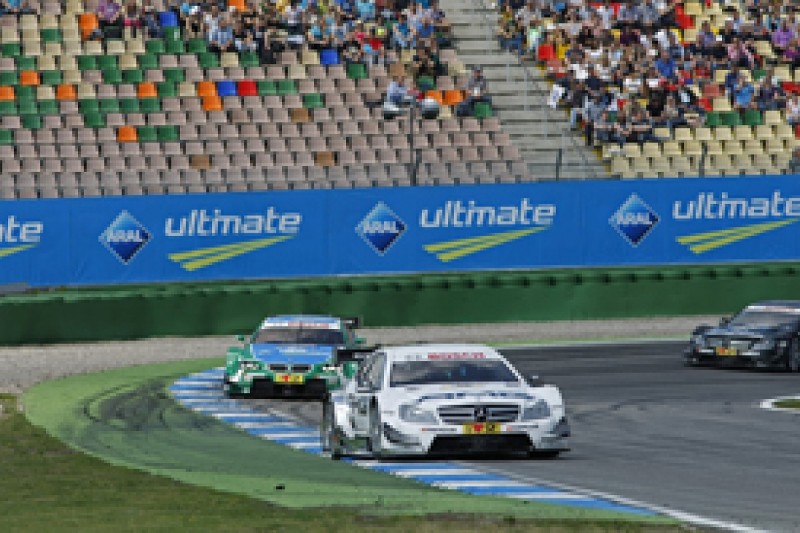 Mercedes rookie Pascal Wehrlein led most of the first half of the race after staying out on options during the safety car and not pitting until lap 25.

He and his RSC Mucke team-mate Juncadella, who ran a similar strategy, finished outside the top 10.

Mattias Ekstrom damaged the front end of his Audi in a first-corner brush with Juncadella and Paffett and was later given a drive-through penalty - after his bonnet had flown off - for spinning Edoardo Mortara. He retired when he lost drive while Mortara, who already had a damaged splitter, also failed to finish.

Robert Wickens retired early on, the Canadian's strong run in fourth ending when his throttle stuck open approaching the Spitz Kehre. He narrowly avoided taking Spengler with him.