While the series' 2017 regulation tweaks targeted "a reduction of the aerodynamics", the DTM has faced further calls to trim downforce - with BMW regular Timo Glock saying it should take cues from Australian Supercars.

The DTM has now announced it will mandate a further simplification of aero for 2018, the final season in which outgoing manufacturer Mercedes will compete against BMW and Audi.

The three manufacturers had agreed to changes to the technical rulebook as part of talks over abolishing the series' performance weights system, which was ultimately dropped before the final two rounds of 2017.

The tweaks, as demonstrated in comparison shots released by BMW of its 2017 and '18-spec M4 DTM challenger (below), include a reduction in the number and size of front aero flicks as well as the removal of the side endplate. 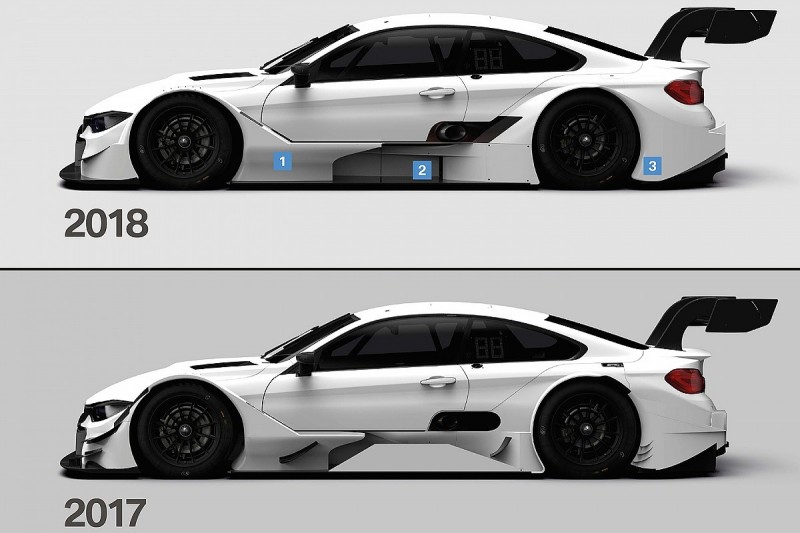 By DTM's estimation, the regulation changes should lead to the downforce being reduced "by about a third".

The championship has also announced an increase in the yearly engine allocation per car and a minimum weight of 1115kg - 10kg lower than the base weight used last year.

Each manufacturer will now be permitted the use of eight engines, up from seven last year, for its six cars throughout the season. Those engine changes can be made without penalty.

It has also clarified that the race leader will now be "strictly the one to dictate the speed" on side-by-side 'Indy-style' restarts that were adopted last year.

The series will introduce restrictions on pitboard communication in order to further curb "the tactical measures of the teams".

Despite existing restrictions on pit-to-car communication, the 2017 season featured a number of team order controversies.

Going forward, teams will only be allowed to use pitboards to request a stop and in cases of emergency.