The Brazilian started second on the grid, but outdragged Jamie Green's pole-sitting Abt Sportsline Audi into the first corner and opened up a 1.5-second lead immediately in his RBM-run M3.

Unlike Farfus, Green and the fast-starting Bruno Spengler, championship leader Mike Rockenfeller had started on the harder-compound 'standard' tyres, and led a gaggle of cars into the pits as the mandatory stop window opened on lap four.

Once on the softer 'option' Hankooks, the Phoenix Audi man took large chunks of time out of the trio while in clear air and was able to run on Farfus's tail during the second stint.

While Farfus gradually drew away by over 6s to take his second win of the season, Rockenfeller and Green circulated in formation to complete the podium positions.

Rockenfeller's result means his championship lead was reduced slightly from 35 points to 33. He will win the title with a second-placed finish in either of the two remaining races.

Filipe Albuquerque followed Rockenfeller into the pits on lap four and ran alone for much of the afternoon to take his first points finish of the year in fourth in his Team Rosberg Audi.

One place further back - and also taking his best finish of the year - was Timo Scheider. The two-time champion employed a longer-than-most middle stint on options to take fifth, having run eighth early on.

Gary Paffett marked his 100th DTM start by finishing best of the Mercedes drivers in sixth while Mattias Ekstrom emerged at the head of a five-car battle over the closing stages for seventh.

Edoardo Mortara was last at the end of the opening lap after stalling on the line, but long stints on both standard and option tyres put him in clear air for much of the race and he finished 10th, right on the tail of Ekstrom, Miguel Molina and Adrien Tambay. 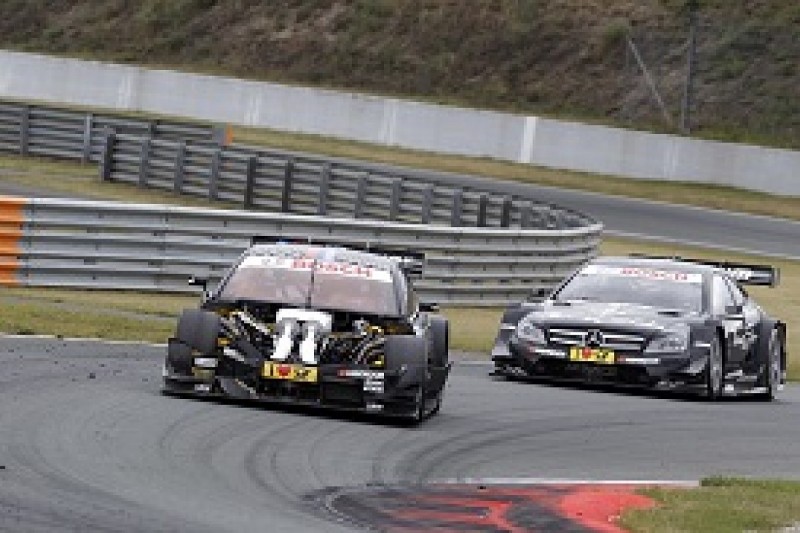 After running third and sixth early on, the Schnitzer BMWs of Spengler and Dirk Werner showed a severe lack of race pace on standard tyres.

Spengler's race - and his title hopes - ended when he spun Robert Wickens around at Turn 3 while squabbling over 12th spot. Wickens also retired as a result.

The incident remained under investigation as the race ended, Spengler insisting that Wickens was slower than normal into the corner.

Also in the wars were Andy Priaulx - spun at Turn 2 by Daniel Juncadella when on course to finish in the top 10 - and his RMG team-mate Martin Tomczyk, who was given a drive-through penalty after being judged to have jumped the start.

Christian Vietoris, who began the race second in the points, struggled all weekend and finished 18th.

Gotz wants another DTM test after Lausitz run with Mercedes