Mercedes driver Engel, who returned to DTM in 2017, hadn't finished higher than sixth in his first stint in the series in 2008-2011 and had just four points to his name ahead of the race.

But the German, who lined up in penultimate place on the grid, made the most of a profitable lap-one stop, overtaking both Loic Duval and reigning champion Marco Wittmann later en route to victory.

Having inherited pole when fellow BMW driver Tom Blomqvist was excluded from qualifying, Bruno Spengler moved to block the fast-starting Mattias Ekstrom off the line.

Spengler then built up his lead to a second over the opening lap, and it fluctuated around that mark before the safety came out on lap six.

BMW driver Maxime Martin was the culprit, going off into the barriers with his car's brakes erupting in flames.

The subsequent four-lap interruption bunched up the pack, which was of great benefit to Wittmann, Duval, Engel and Blomqvist, the quartet having all pitted on the opening lap. 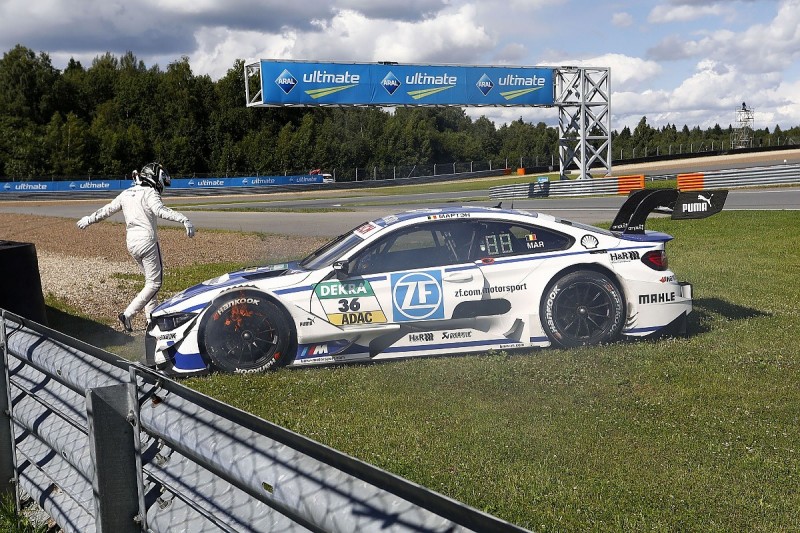 Shortly after the race got underway again, Ekstrom nudged Spengler wide in the final corner to take the lead of the race.

He then pushed for a few laps in clean air and came into the pits for his mandatory stop on lap 16, but the Swede rejoined almost 20 seconds behind Wittmann - who soon cycled through to the front.

However, he wasn't leading, because Audi kept Nico Muller out on track, specifically holding up the early-stoppers.

For many laps, Wittmann was unable to find a way past Muller - and on lap 22 the BMW driver instead fell prey to a cut-back move from Engel heading out of the final corner.

Engel was not able to get past Muller either and shadowed the Swiss driver until finally came in on lap 33 of 36.

Behind, Ekstrom was closing after picking off the early-stoppers and crossed the finish line just 0.3s back from Engel.

Also charging in the late stages was Spengler, who eventually brought the car home in third place for a record fifth Moscow Raceway podium.

Spengler had slipped behind the late-stopping Audi of Jamie Green, but when Green caught up to Wittmann and forced him wide in the final corner, the Canadian picked up the pieces.

Blomqvist was shuffled down to eighth place at the chequered flag, finishing just ahead of Mercedes duo Lucas Auer and Robert Wickens.

In the championship standings, Ekstrom has retaken the lead from Rast by one point, with Auer now a further 15 adrift.