Four drivers, headed by BMW's Marco Wittmann, stopped on the opening lap and caught up to the field during a safety car period before cycling towards the front as the early frontrunners pitted.

But Muller stayed out until three laps from the finish, keeping the early stoppers at bay and allowing the chasing pack to catch up.

Muller's Audi stablemate Mattias Ekstrom emerged from the pits 20 seconds behind the pack, but reeled them in and went on to finish second, 0.3s behind Mercedes' race winner Maro Engel.

"Nico Muller was doing nothing but blocking and trying to be a - in bike racing, you say, Wassertrager [water carrier] - for the big boss," BMW motorsport boss Jens Marquardt told Autosport. "He did this well.

"What fans want to see are proper straight fights, head-to-head and not strategy and chess playing with cars.

"For me this is not what people want to see and what they paid money for - but that's for somebody else to decide."

Mercedes head Ulrich Fritz added: "We have to ask if we want to play chess or go racing.

"What I saw from Muller was intentionally holding back the guys behind.

"Maro was lucky and won but the guys at BMW [Wittmann and Tom Blomqvist] lost a lot of places and the same could've happened to us." 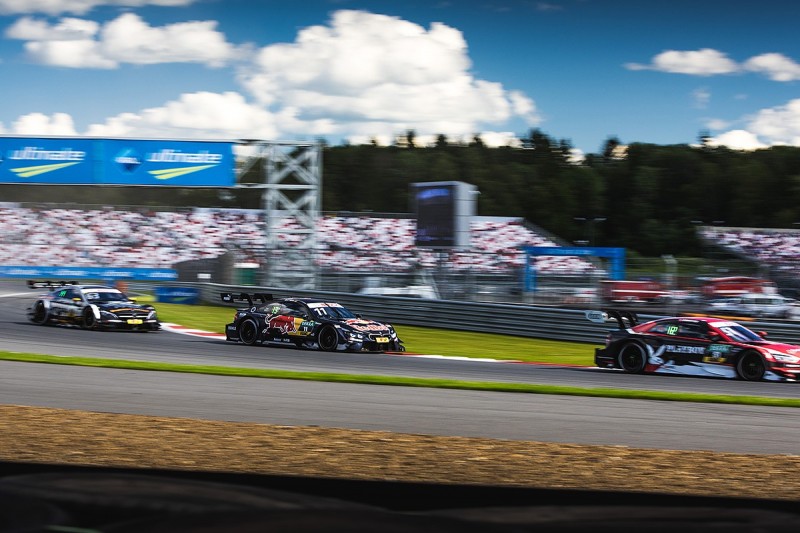 Reigning champion Wittmann felt his race was "destroyed" by Muller after using up his DRS activations trying to pass the Audi.

"Audi left Muller out until near the end slowing us down - me, Maro and so on - massively," said Wittmann, who ended up sixth.

"It was obvious what he did, slowing us down in the high- [and] medium-speed corners.

"For me that has nothing to do with fair racing.

"I'm quite disappointed because today we could've won. They actually destroyed my race."

Audi conceded Muller's strategy was an "extreme one" but questioned how much faster those behind could have gone.

"The strategy was to go long, and he went at the pace he was able to go," said Audi motorsport boss Dieter Gass.

"I'm not sure if everybody behind him was able to go quicker; at one stage Wittmann dropped out of the DRS window.

"It was an extreme strategy, but it paid off with a very exciting race for everybody."

Muller said he was trying to manage his pace to be able to stop later.

"I was expecting to go long, so I had to manage my tyres and try to survive for a long stint," he said.

"Obviously while you do that you don't want to lose position.

"You can re-watch the race and see how many times I closed the door on the long straight - probably two or three times.

"They had DRS, I didn't and they didn't manage to get past on such a long straight."