Nico Muller has explained how a "smarter" Rene Rast prevented him from passing during their late battle for victory in Sunday's DTM race at Spa-Francorchamps.

After Muller dominated the season opener on Saturday, he and Audi stablemate Rast were locked in a tight battle for victory in the second race of the weekend at the Belgian track, Rast having passed Muller on lap 21 of 26 to grab the lead.

However, Muller stayed close to Rast and was planning an attack on the final lap, aware that Rast would have probably re-passed him had he made his move prior to that.

When Muller tried to line up a move on Rast after La Source, the two-time champion lifted off the throttle while running directly in front of him, wasting Muller's push-to-pass aid.

The Swiss driver then got another shot at passing Rast on the Kemmel straight, but his DRS was forced shut after a wobble at the exit of Radillion caused him to cross the 1.5 lateral g-force threshold at which the system automatically deactivates.

A combination of the two factors allowed Rast to take the chequered flag by 0.483s and prevent Muller from taking a clean sweep of victories at Spa.

"Today I kind of feel like I should have won the race as well," Muller said after the race. "I messed it up and he [Rast] was very, very smart - he was smarter today.

"I knew that he would know that I would try on the last lap, he was expecting something. So Rene was very smart, backing me up and actually I didn't expect it to be that late. I thought it would come earlier at La Source.

"At one point I was confident that he was gonna just try to stay at front and do something down the straight. And so I activated my push-to-pass, for me in the car it felt like merely a second after he started to lift off, and I was like, 'no, that's my push-to-pass wasted'.

"And then we came up on top of Eau Rouge, activated the DRS, had a little slide, so it closed up automatically as well. So both of my overtaking tools were gone and wasted thanks to a very smart Rene. He used all his experience today, he showed why he is the one to beat." 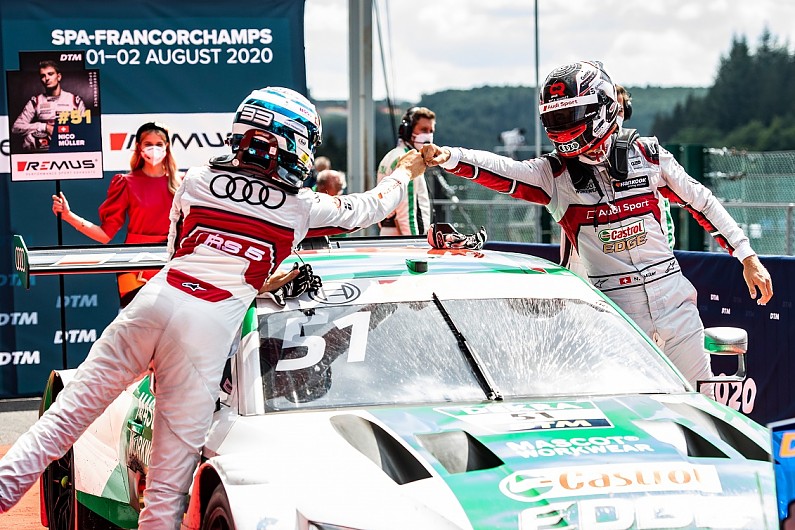 Rast said he was aware that Muller would make a last-gasp attempt at passing on him on the final lap, and he positioned his car at the exit of Eau Rouge in a way that would allow him to keep his 2019 title rival at bay.

"I felt that in the second stint I was on the same pace like Nico," Rast said. "At one point I could pass him and then it felt like Nico didn't want to pass me back, because obviously once he passed me back he would be in the lead. I would have DRS and it would switch back and forth.

"So he was very smart to stay behind me, was waiting for the last lap. And I knew it's gonna be the last lap or nothing.

"I prepared my exit of Eau Rouge a bit differently. So I took his momentum away. He was not able to pass me back on the back straight, which was for me the key to the victory."