Nico Muller cruised to a dominant victory in the opening race of the 2020 DTM season at Spa-Francorchamps, as Audi swept the top five positions to assert its supremacy.

At the start of the race, Robin Frijns led the field from pole position, with the sister Abt Audi of Muller slotting into second place.

Frijns initially stretched his advantage to over a second, but started to fall into the clutches of Muller on lap 4, with the gap between the two dropping down to 0.6s.

This allowed Muller to get a great run on Frijns along the Kemmel straight before executing a simple move into Les Combes to seize the lead of the race.

From there on, Muller enjoyed an untroubled run as others suffered with tyre woes, crossing the line with 19.502s in hand to claim his fifth victory in the DTM.

Jamie Green, who had qualified last of the factory Audi runners in 11th, put on a stunning drive to finish behind Muller, passing Loic Duval at Blanchimont on the penultimate lap for second place.

Mike Rockenfeller appeared to have done enough to secure second, having passed both Rene Rast and Frijns in rapid succession on lap 20.

However, his tyres appeared to give up five laps later, allowing both Duval and Green to demote him to fourth. 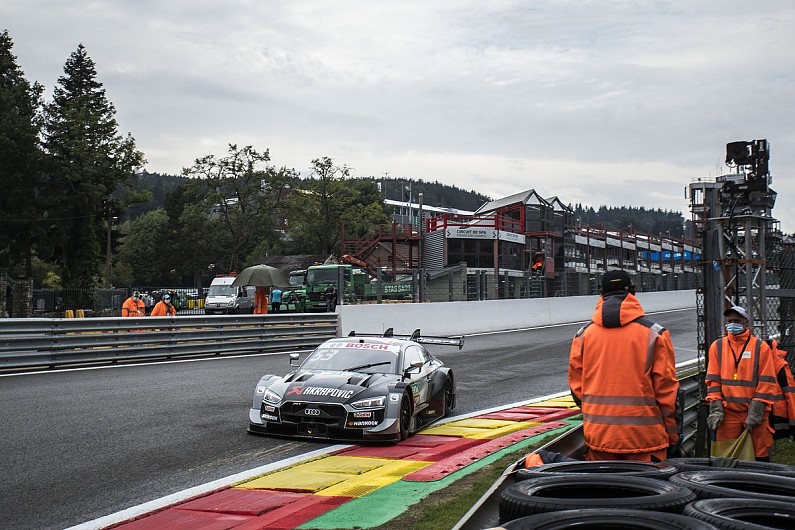 Rast switched to an unconventional two-stop strategy after tyre struggles of his own, but recovered to finish fifth, just three seconds behind Rockenfeller.

Philipp Eng was the top BMW driver in sixth, having waited until lap 15 to complete his sole pitstop.

Lucas Auer finished just 1.5s behind Eng in seventh in his first outing for BMW, ahead of Timo Glock (BMW) and Frijns, who slipped down the order in the closing stages of the race.

Wittmann had been running as the top BMW driver in fifth, but his pace began to drop off rapidly in the final five laps of the race.

Formula 1 convert Robert Kubica finished 14th on his DTM debut in an ART-run BMW, more than a minute behind the winning car of Muller.

Sheldon van der Linde was the only driver to retire from the race after suffering technical issues while running in sixth place on lap 2.

Ferdinand Habsburg failed to take the start after his WRT Audi took heavy damage during a crash at Stavelot during practice.