Rene Rast overhauled long-time leader Nico Muller in a tense duel to win the second race of the 2020 DTM season at Spa Francorchamps.

Muller made a quick getaway from third on the grid, immediately dispatching his team-mate Robin Frijns on the run to La Source before setting his sights on polesitter Rast.

On lap 4, Muller sufficiently closed in on Rast to pull alongside the two-time champion along the Kemmel straight and slipped past him at the outside of Les Combes.

However, unlike Saturday's opener where Muller checked out after moving to the front, the Abt driver was unable to pull more than a second clear of Rast.

Rast eventually started falling into the clutches of Frijns in third and was nearly overtaken at the downhill Bruxelles right-hander, but managed to hold on to second until his mandatory stop on lap 13 of 26.

He initially lost time passing the yet-to-stop BMW of Marco Wittmann, but once ahead he slowly started chipping away at Muller's lead.

Finally, on lap 21, Rast was able to breeze past heading into Les Combes, claiming the lead for the first time since the opening part of the race.

After moving ahead, Rast was unable to break away, the gap between the dropping as low as 0.3 seconds at the start of the final lap. 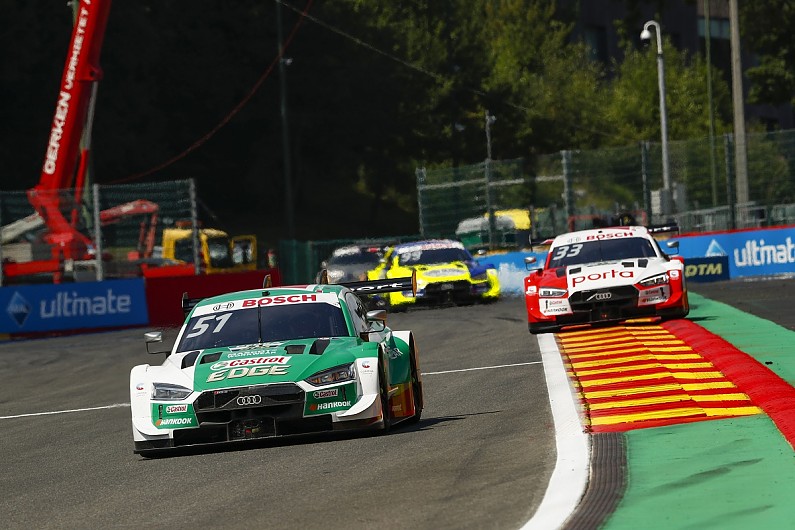 However, Rast did just enough to secure his 18th career win and prevent Muller from completing a clean sweep of victories at Spa.

Frijns finished over five seconds behind the leading duo in third to secure Audi's second podium lockout of the weekend.

Jamie Green charged from lower reaches of the grid once again, passing Mike Rockenfeller at La Source on Lap 20 to finish fourth.

Sheldon van der Linde was classified the top BMW driver in sixth, 24s down on the race winner, as the Bavarian brand again struggled to match the performance of Audi.

Loic Duval, who had to start 13th after losing his best qualifying time for a breach of track limits, recovered to seventh, and last of the factory Audi drivers.

Two-time DTM champion Wittmann extended his first stint until lap 19, allowing him to charge through the field in the final hour to claim the final championship point in 10th.

Formula 1 convert Robert Kubica endured another a difficult race at the wheel of an ART-run customer BMW, finishing 14th, only ahead of the two-stopping Ferdinand Habsburg (WRT Audi).

Harrison Newey was the only driver to retire from the race, the Englishman pulling his WRT Audi into the pits on lap 13 with what appeared to be a technical problem.

Newey was earlier handed a drive-through penalty for pitching Aberdein into a spin at the exit of the Bus Stop chicane on the opening lap.