After Toyota Gazoo's Nasser Al-Attiyah comfortably set the pace in the short opening stage on Monday, Sainz said it was evidence that the Japanese marque had been given too much of an advantage over Peugeot.

However, when Peugeot's Sebastien Loeb beat Al-Attiyah to the top spot by almost a minute and a half during Tuesday's 275km run, Toyota drivers in reckoned that it was clear the French marque was not shortchanged by the rule tweaks.

"This is too much talking from many, many drivers - Seb took one minute 30 seconds," Al-Attiyah told Motorsport.com.

"The Peugeot is fast, and I'm sure is faster than the Toyota."

Giniel de Villiers, who is a close fourth behind Sainz in the overall classification, echoed team-mate Al-Attiyah's sentiment.

"I don't know why he [Sainz] is complaining so much," de Villiers said.

"All the cars have exactly the same restrictor [at 38mm], they all breathe through the same hole. That's the fairest it can be. 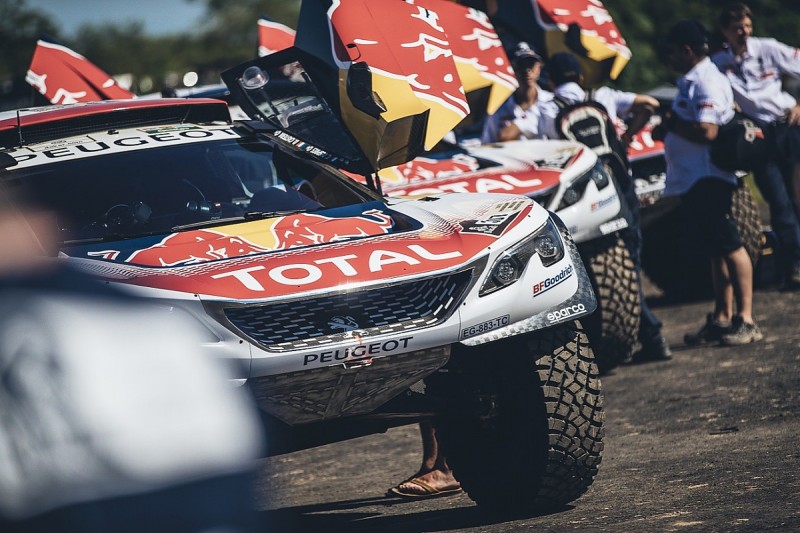 "The technology in the diesel is so good now that it's no reason why they should have a bigger restrictor than a [petrol] car."

Toyota Overdrive's Nani Roma, who currently sits fifth overall, noted the performance gaps from the air restrictor tweaks were designed to average out over the 2017 Dakar's wide range of altitudes.

Roma said: "Last year they were so calm - who doesn't like to win with no opposition?

"This rule is for the average of 2000 meters of altitude. It's important to see where we are in the rest [of the stages]."

De Villiers added: "The Peugeot is still 400kg lighter than us, so at altitude we'll see, it'll be difficult to keep up with them with the power-to-weight [ratio].

"It's a lot better for us at the moment because we're close to sea level - and you can see, it's a nice fight.

"Loeb went very well, pushed quite hard and he won the stage - but it wasn't by six and seven minutes, so that's good for the sport."

"It was a stage that suited the Peugeot," he said. "It was straight, very fast - and the first part was very, very bumpy.

"It suits a two-wheel drive car. So that's why he won."