Loeb, who was sixth on Monday's 24-mile opener, was pessimistic about the Peugeot 3008DKR's chances on the World Rally Championship-style sprint stages given technical rule changes for this year's event.

But the WRC legend wound up leading at every split of the 171-mile timed element of the Resistencia-Tucuman stage, and was 1m23s clear at the finish line as he claimed the fifth stage win of his Dakar career.

Al-Attiyah managed to limit his losses by finishing the stage in second, the Qatari remaining within half a minute of Loeb. 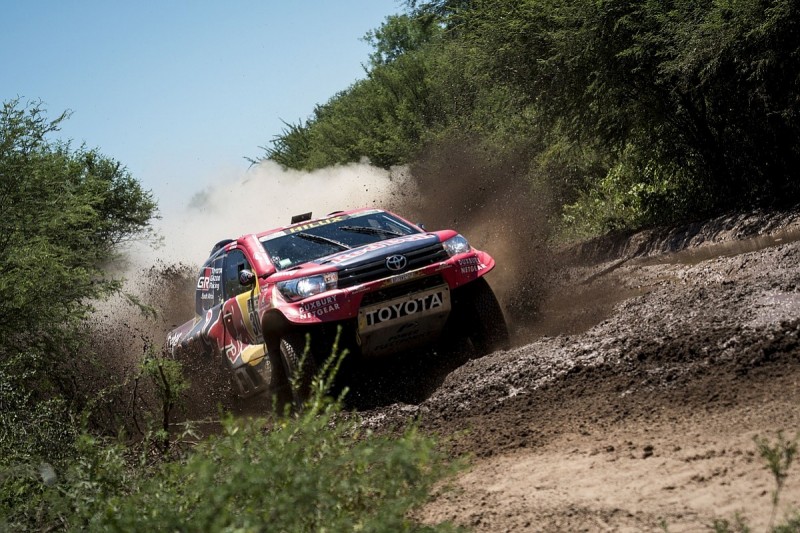 Their respective team-mates - Carlos Sainz of Peugeot and Giniel de Villiers of Toyota - were closely-matched through the stage and are now sat around two minutes adrift of the lead in third and fourth.

But while Nani Roma made it three Toyotas in the top five, both on the stage and overall, Peugeot's two remaining cars were noticeably off the pace.

Peterhansel blamed dust from other cars in his position in the start order, while Despres had to drive cautiously after losing his antenna system that warns other competitors of his approach.

As a result, Peterhansel is now seventh overall, between the X-raid Minis of Yazeed Al-Rajhi and Mikko Hirvonen, while Despres has dropped out of a top 10 completed by privateers Erik van Loon, Romain Dumas and Jakub Przygonski.

Ex-WRC driver Xevi Pons, who was an impressive second on Monday's opener in the South Racing Ford Ranger, rolled his car early on the second run and lost a wheel later on, ending his Dakar.