Ant Whorton-Eales started on pole in his AmD Tuning Audi S3 and held the lead at the start, with Speedworks Motorsport driver Ingram jumping his Toyota Avensis ahead of Motorbase's Rory Butcher for second on the run to the first corner.

Whorton-Eales survived an attack from Ingram at the Clark's right-hander on the opening tour, but relinquished the lead less than a lap later after a wayward moment at the chicane.

That handed Ingram the lead from the BTC Racing Chevrolet Cruze of Dave Newsham, Butcher - who inadvertently hit the rear of Whorton-Eales as the Audi rejoined the track - and Honda's Gordon Shedden.

After a feisty scrap with brother-in-law Butcher, Shedden dragged his factory-backed Civic Type R past the Motorbase Ford along the pit straight on lap five before clearing Newsham at the hairpin a tour later.

But by the time Shedden had worked his way into second, he found himself more than five seconds behind race leader Ingram - a gap that only extended thereafter.

Instead of catching the Toyota, Shedden was forced to defend from the two WSR BMW 125i M Sports of Rob Collard and Colin Turkington - who had also cleared Newsham and Butcher.

Collard worked his way past Shedden on the start/finish straight and into Duffus Dip, only for Shedden to return the favour at Clark - forcing Collard out wide and behind Turkington. 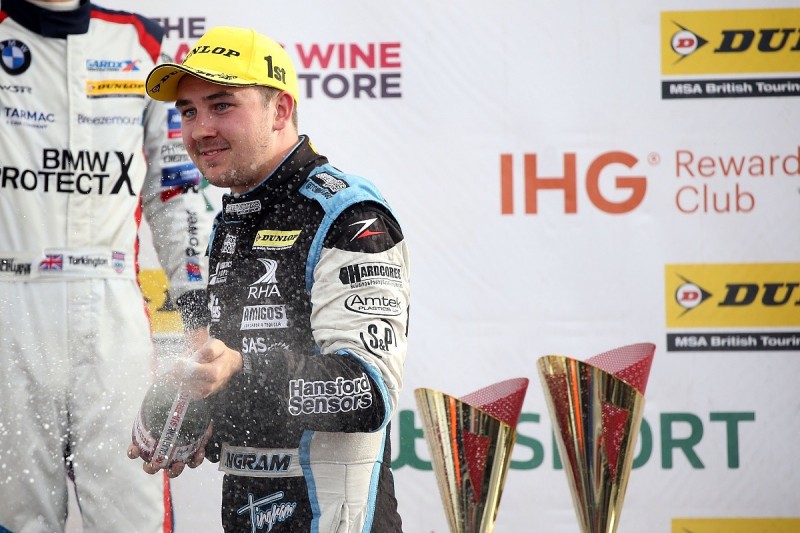 Ingram had meanwhile extend his advantage north of nine seconds, but that lead was wiped out moments later when the safety car took to the track after Ollie Jackson stopped out on track in the second AmD Audi S3.

A swift recovery meant racing resumed a lap later, but while Ingram made a lightning getaway on the restart, his lead was again wiped out when the safety car made its second appearance to allow for Will Burns's Team Hard Volkswagen CC to be retrieved.

Two laps of the extended 27-lap distance remained, but Ingram again accelerated well down to the hairpin on the second restart to prevent offering Shedden any sniff of the lead.

The 23-year-old eventually grabbed his third win of the season by 1.167 seconds, with Shedden a relieved third after resisting championship leader Turkington.

Ash Sutton cleared team-mate James Cole to end up best of the Team BMR Subaru Levorgs in fourth, with Cole completing a hat-trick of fifth-place finishes at the Scottish circuit ahead of the third Levorg of race one winner Plato.

Mat Jackson came home seventh in his Motorbase Ford Focus ahead of a charging Matt Neal - up from 22nd on the grid - while Butcher and Newsham wound up ninth and 10th.

Collard went off for a second time after the second restart, and brought his BMW home in 11th.