Subaru Levorg driver Sutton overtook Plato at mid-distance to move to within two points of the championship lead.

Plato, saddled with 75 kilograms of ballast after winning race one, led away from pole at the initial start before the race was quickly red flagged for an incident at the first corner.

The Power Maxed Racing Vauxhall Astra of Senna Proctor shaped to the outside as he attempted to overtake Speedworks Toyota Avensis driver Tom Ingram, but was sent sideways by a tap from Matt Neal.

Team Dynamics Honda Civic Type R driver Neal in turn had been hit from behind by the WSR BMW 125i M Sport of Andrew Jordan.

That put Proctor sideways through Duffus Dip and, out of control, he was collected by Jordan.

That caused a delay in the midfield, with Dave Newsham, Josh Cook and Matt Simpson also affected while Stephen Jelley crashed head on into Proctor's Astra.

The race was delayed by some minutes while a recovery effort began, but Plato made a second strong getaway on the second standing start as Sutton was forced to defend from WSR's Colin Turkington.

After resisting the BMW 125i M Sport into Duffus, Sutton followed Plato as the two Team BMR Subarus again broke away from the chasing WSR cars of Turkington and Rob Collard, with Sutton inching closer to his team-mate.

Championship challenger Sutton got a better exit off the final hairpin at mid-distance and had enough room to sneak up the inside on the start/finish straight to claim the lead, but was forced to work for his win with Plato stalking his every move. 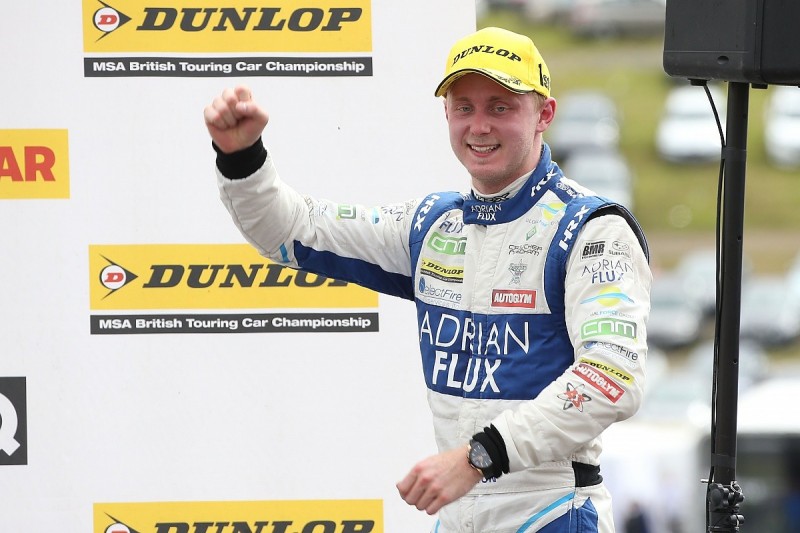 Sutton eventually clinched the win by 0.238 seconds, and is two points shy of third-place finisher Turkington at the top of the drivers' standings.

Collard was fourth for a second race in a row behind team-mate Turkington, with James Cole a lonely fifth in the third Subaru Levorg, ahead of Team Dynamics driver Gordon Shedden.

Free of ballast for race two, a feisty Shedden diced through the order in his Civic Type R in the early stages of the race to advance to sixth, but couldn't make an impression on Cole and eventually finished a couple of seconds shy of the BMR man.

Shedden had been sandwiched by the Subarus of Cole and Josh Price in the initial classification but, after a charge of his own, Price was later excluded from the race for overtaking in a yellow flag zone.

He had started the race in 18th but raced through the order and, despite being involved in contact that eliminated Shedden's team-mate Matt Neal in the latter stages, looked to have clinched his best result in the BTCC before his exclusion.

Dave Newsham therefore inherited seventh in the final order in his BTC Racing Chevrolet Cruze ahead of Tom Ingram.

Motorbase's Rory Butcher moved up to ninth in only his second race in the BTCC aboard his Ford Focus, and will share the front row of the grid for the finale with Ant Whorton-Eales - who was promoted to 10th and will start the reversed-grid third race from pole.