The Team BMR ace became the second driver this season - after team-mate Jason Plato's double at Oulton Park - to win races one and two on the same day with a faultless drive in his Volkswagen CC.

Turkington was aided by fellow front-row starter Sam Tordoff getting away very poorly in his WSR BMW 125i M Sport, which dropped him from second to fourth behind Adam Morgan and Andy Priaulx.

That was nothing compared to the chaos behind. Rob Collard, Barry Horne and Stewart Lines went off at Riches, while the two Eurotech Hondas of Jeff Smith and Martin Depper hit each other and Warren Scott.

But the most significant exit was Gordon Shedden's. The erstwhile championship leader was pitched into the barriers on the run to Hamilton by Honda team-mate Matt Neal as the pack bunched up halfway round the opening lap. 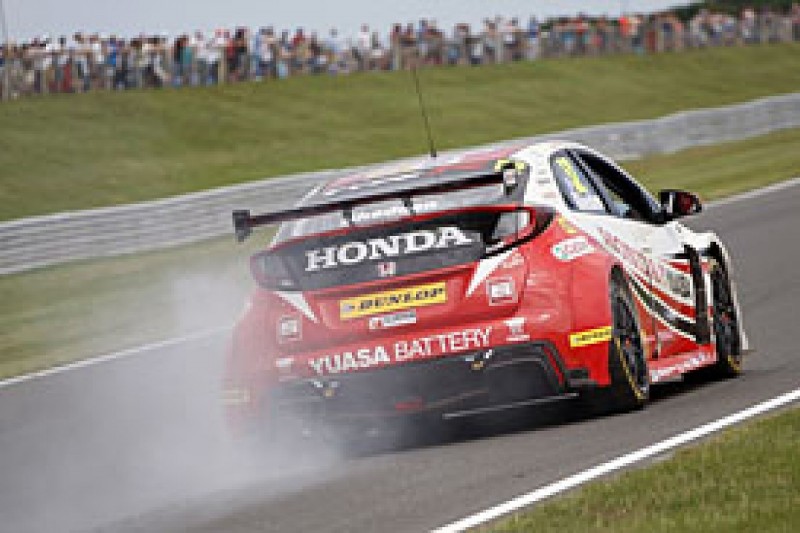 As Shedden crawled back to the pits with heavy damage to the rear of his Civic Type-R, on the next lap Neal was on the receiving end of contact from Rob Austin's Audi at Montreal.

The three-time champion would retire at mid-distance after being shown a mechanical warning flag for the damage his Civic sustained in both clashes.

Further round the second lap, Aron Smith and Dave Newsham collided at Hamilton, putting both out of the race.

Newsham's Power Maxed Racing team-mate Josh Cook was the next to exit, pitting his Chevrolet Cruze to repair a puncture while running 10th.

The frontrunning positions were unaffected by the early frenzy, with Turkington, Morgan, Priaulx, Tordoff and Jason Plato making up the lead group and opening up a gap back to the MG of Jack Goff behind.

Turkington gradually edged clear, as Priaulx hounded Morgan for second. The three-time world champion eventually got slightly out of shape at Oggies, which delayed team-mate Tordoff and allowed Plato to pass him for fourth at Williams.

Morgan expertly fended off Priaulx for the duration and while Tordoff came back at old MG team-mate Plato at the end, the order remained unchanged to the flag.

While Goff had a lonely run to complete the top six (and subsequently earned reversed-grid pole for race three), Jordan had his mirrors full of Tom Ingram's soft-shod Toyota Avensis all race.

Ingram suffered late heartbreak when his Speedworks car picked up a puncture at the end of the penultimate lap, and he dropped out of the points entirely.

Through all of that, Mat Jackson came through to eighth in his Motorbase Ford Focus, with Austin surviving his early clash with Neal to bag ninth and Mike Bushell securing the best result of his rookie campaign in 10th.

Horne, a late substitute for Alex Martin in the Team Parker Racing Ford Focus, scored the team's first points in the BTCC after finishing 13th despite his early trip off-track at Riches.