Race one winner Adam Morgan started the event from pole position in his Ciceley Racing Mercedes-Benz A-Class fitted with 75kg, but Sutton's Team BMR Subaru Levorg powered clear away from the line to dominate the race despite two safety car interruptions.

The 24-year-old eventually finished nearly 4.5s ahead of Morgan and has now moved into third place in the points, just 17 off table-topper Tom Ingram (Speedworks Toyota).

"We certain made the right choice on tyres," said Sutton. "I went to the grid on wet tyres and only then fitted the slicks, and so I didn't have as much temperature as those around me.

"But we played it well and I managed to get the grip quite quickly. What a race and the guys in the team have played a huge role in this so thanks to them."

Third place went to Ingram after a sensational drive through the pack in his Avensis. 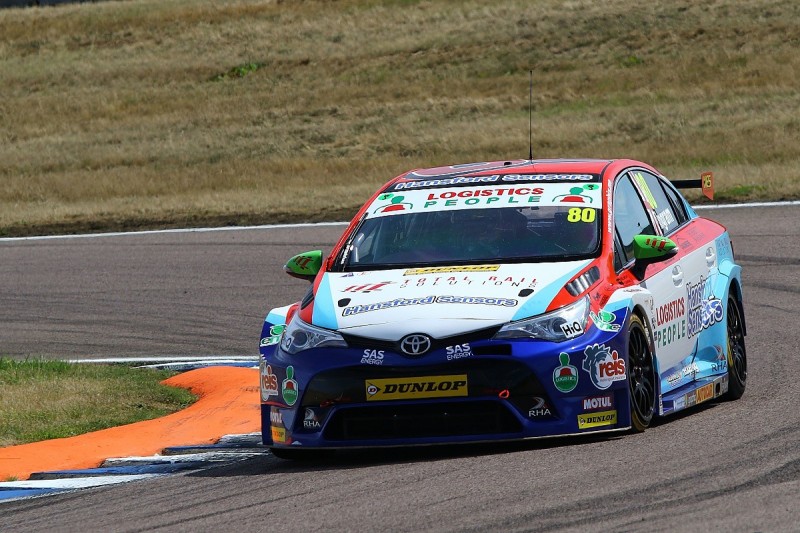 He had started from 27th place after a fly-by-wire throttle problem in the opening race, but picked his way through the field and claimed third when Senna Proctor's Power Maxed Racing Vauxhall Astra slid wide at the final chicane on lap 17.

"That was one heck of a drive - I just wished we didn't have to do it at all," said Ingram.

"I managed to get to 12th place within a few laps, and my engineer came on the radio and said I had plenty of time to get the rest. I just knuckled down and got on with it."

Mike Bushell's Team Hard VW CC had run in third place early on, but dropped back down the order to seventh position, ahead of Rory Butcher's AmDTuning MG, Matt Simpson's Eurotech Honda and Tom Chilton's Motorbase Ford Focus, which has been drawn on pole for race three.