Both the 40-minute timed sessions were held in damp conditions, with the circuit only
drying slightly over the closing moments.

The 26-year-old eclipsed the factory Honda Civic Type R of Dan Cammish midway through the second period to record a lap of 1m19.863s.

"We still need to get faster, [as] everyone else will," said Cook.

"I never even look at the timesheets during qualifying, it is all about getting the balance of the car right and we still have a way to go to make it perfect.

"We also don't know what the weather is going to do [for qualifying this afternoon]. It is a muddled picture at the minute."

Behind Cammish, Chris Smiley took the third-best time in his BTC Norlin Honda Civic, while
Andrew Jordan's time from the opening period meant his WSR BMW 125i M Sport was
enough to put him fourth in the combined standings.

The 2013 title winner was forced to sit out the second period of the second session
when a turbo pipe failure was suspected on his German car and he drove his smoky car into the garage. 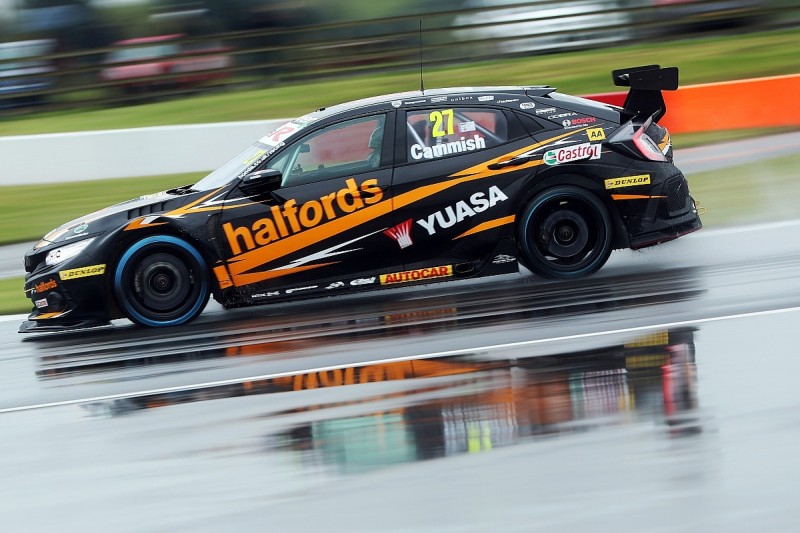 Also setting his fastest time in session one was reigning champion Ash Sutton, who recorded a 1m20.415s lap in the Team BMR Subaru Levorg to place fifth in the combined times.

However, he too was stuck by dramas in the second session when a suspected engine
problem meant he only recorded nine laps.

The combined top six was rounded out by the Eurotech Racing Honda Civic Type R of Brett Smith, who had a couple of small offs in the second session.

The second factory Honda of Matt Neal was in the wars, missing most of the second session following damage sustained after the three-time champion went off.

Jason Plato's Subaru Levorg also lost out on some running as it ground to a halt at the end of the pitlane. Plato returned to the action for the closing minutes.

He managed to return to the pits and continue once the system had been reset.

How the BTCC's craziest race was won