The Bath racer grabbed the top slot on the very last lap after a truncated, damp session, which had been halted with five minutes to go as Aiden Moffat's Mercedes-Benz A-Class ran into the gravel on the exit of the chicane when its upright broke.

The rain abated slightly as the cars readied themselves to rejoin the circuit.

The first to eclipse Sam Tordoff's benchmark was Chris Smiley in his BTC Norlin Honda Civic.

Smiley held on until the the very last lap, when Cook sealed his first pole to outshine the Civic driver by 0.030s.

The 26-year-old Cook, who has yet to win a race in the championship, said: "It was certainly lively in that last dash - the stoppage made it interesting and made the heart rate go up a bit.

"I am delighted for myself and for the team, but this is only 50% of the job. We have to convert it into results tomorrow." 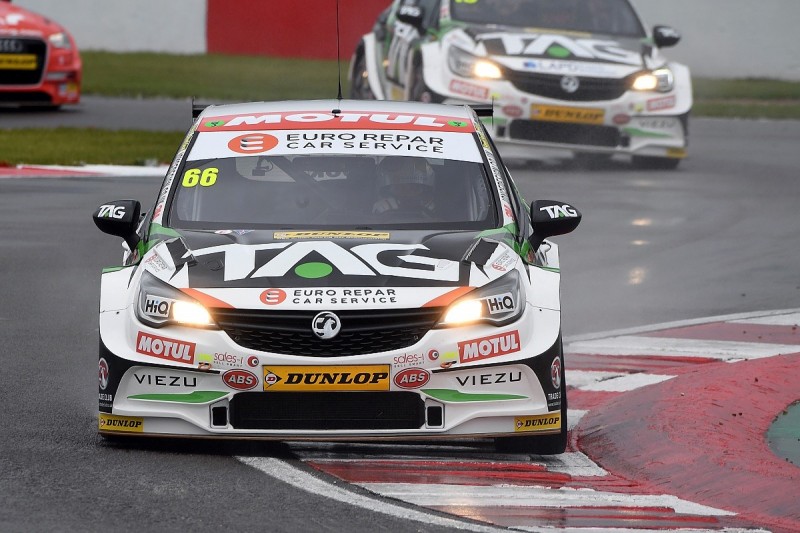 "I am disappointed," he said.

"While I was on my fastest lap I could see that I was 0.3s up on the delta, but I took slightly too much speed into Coppice and that cost me pace all the way down the back straight."

Early pacesetter Tordoff was relegated to third place but said he was pleased with the improvements that had been made to his Motorbase Ford Focus over the morning sessions.

He will share the second row with the factory-backed Team Dynamics Honda Civic Type R of series rookie Dan Cammish.

Moffat, who had been fastest over the opening part of the session, dropped to fifth and he will start alongside Jack Goff in the Eurotech Racing Honda Civic Type R, who took his 66kg of success ballast to sixth spot.

Colin Turkington was the highest qualifying works BMW 125i M Sport in 11th spot after a late burst, although his WSR team-mate Andrew Jordan, who had lost time in the morning with a turbo problem, had a repetition in the afternoon and was restricted to 30th.

Points leader coming into the round, Tom Ingram, could only manage 16th spot in his fully ballasted Speedworks Motorsport Toyota Avensis, just ahead of Matt Neal's Team Dynamics Civic.

Reigning champion Ash Sutton only joined the session after 14 minutes as the BMR squad had performed an engine change between free practice two and qualifying.

He was only able to compete five laps, but set the 22nd best time to finish directly behind his Subaru Levorg team-mate Jason Plato.