Honda's Gordon Shedden has successfully defended his British Touring Car Championship crown after wresting the points lead in the final race of the season, won by Mat Jackson

The Scot beat Sam Tordoff in the Brands Hatch finale to become the first man to claim back-to-back championship wins since Fabrizio Giovanardi for Vauxhall in 2007/08.

With the top seven from race two reversed for the season finale, Tordoff lined up third on the grid, with Shedden right behind him in fifth and Turkington seventh.

Tordoff ran third in the early stages behind Jackson and Aiden Moffat, but Shedden hunted him down after deposing Josh Cook's MG.

The Honda man took third position with ease, cutting back underneath the BMW at Clearways, and pulled clear.

Shedden pressured Moffat for second but had a late scare when he came under intense pressure from Adam Morgan's Mercedes-Benz A-Class, who launched a final-lap assault after a late safety car period to recover Dan Welch's beached Proton.

Shedden soaked up the pressure to come home third and win the title by two points as Tordoff finished fifth. 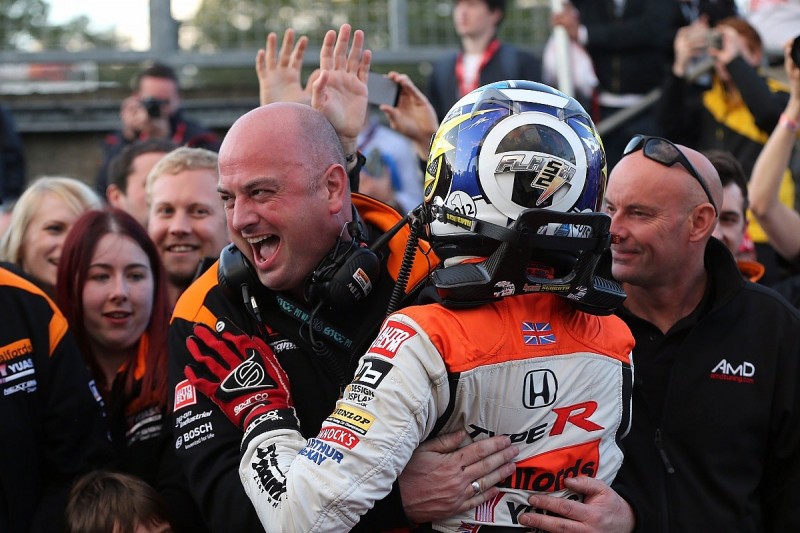 "Boy am I happy," enthused Shedden. "I thought it was all going pear-shaped ten yards into the race because Jason Plato cut across in front and squeezed me up against the pit wall.

"The Honda Civic was just incredible. I'm so chuffed. Matt Neal did the double in 2005/06 and Fabrizio Giovanardi did it in 07/08, but there aren't too many people who have taken back-to-backs in the modern era.

"I've driven my heart out all season and did just enough."

At the front, Jackson led the race from pole position to chequered flag to equal Turkington's haul of five race wins for the 2016 season.

He started on pole position in his Motorbase Ford Focus on the softer tyres carrying 27kg of success ballast, and was untroubled throughout the 18 laps despite two mid-race safety cars.

The third of the title protagonists going into the final race, double victor earlier in the day Colin Turkington, never really featured in the race as he struggled with a Levorg estate heavily laden with success ballast and ended up 12th.