Four-time British Touring Car champion Colin Turkington has moved into the lead of the points standings after taking his second victory in as many races at Snetterton.

As he did in race one earlier today, Turkington led all the way and set fastest lap in his West Surrey Racing-run BMW 330i M Sport, meaning he has harvested a maximum score to date over the Norfolk weekend.

The race followed the pattern of so many of Turkington's wins, the Northern Irishman keeping a snaking train of rivals behind him for the first few laps while he warmed up his tyres and then pulled out a gap.

This time it took until the sixth lap of the scheduled 12 for Turkington to get the margin to over a second to the Speedworks Motorsport-run Toyota Corolla of Tom Ingram, who in turn was soaking up tremendous pressure from Rory Butcher in his Motorbase Performance Ford Focus.

With two laps to go, Turkington was 3.625s to the good, and the struggling Ingram now had Butcher, Ash Sutton, Dan Cammish, Jake Hill and Josh Cook queued up behind him in a ferocious battle for second.

This was temporarily halted when Jack Goff lost the back end of his Team Hard Volkswagen CC at the ultra-fast Riches right-hander and smashed into the inside barrier before rebounding back across the circuit to rest on the outside.

That brought out the safety car and left time for just one lap of racing to the chequered flag. Turkington judged it to perfection so that he was 1.057s in front as the race went green while behind, Butcher whacked Ingram at the Wilson hairpin and sent both wide.

An opportunistic Ash Sutton, who had been signalling Butcher earlier in the race to not worry about defending from him so they could go after Ingram, nipped into third, but the Laser Tools Racing Infiniti Q50 didn't quite have enough to deny the Toyota. 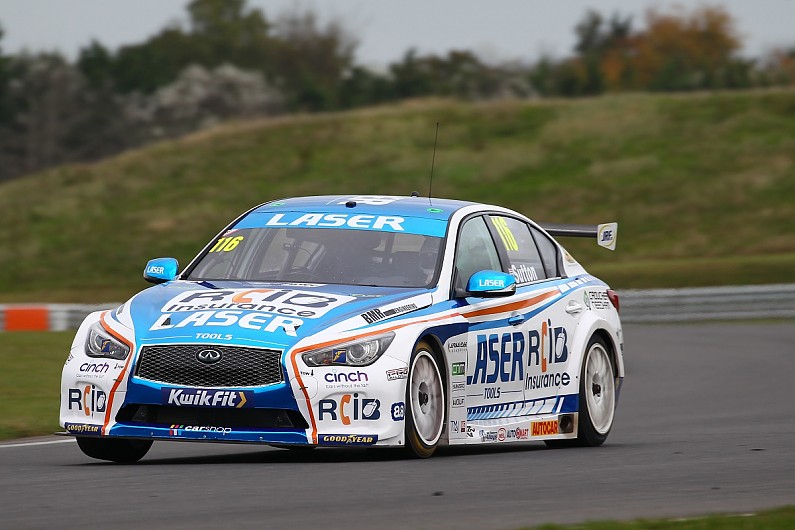 Butcher got sideways at the exit of the final corner, and this seemed to delay the Team Dynamics-run Honda Civic Type R of Cammish, who was pipped to fifth at the flag by the AmD-run MB Motorsport Civic of Hill.

"It's been another great race for me," said Turkington, who now leads Sutton by seven points and Cammish by 20.

"I got the jump after the safety car and I'm glad I did, because you lose a lot of temperature and pressure [in the tyres under caution], and luckily the guys behind were scrapping hard.

"It was important to come here after a difficult Croft round and show what we could do."

Cook claimed seventh in the BTC Racing Honda, while Ollie Jackson got his Motorbase Ford ahead of Adam Morgan's Ciceley Motorsport Mercedes A-Class on the final lap for eighth.

This was a great recovery for Jackson, who started the race 21st on the grid following a first-lap incident in the earlier event.

Chris Smiley (Excelr8 Motorsport Hyundai i30) beat Tom Oliphant to 10th, and this turned out to be highly significant as Oliphant's BMW team-mate Turkington drew the number '10' for the reversed grid, meaning Smiley will start the finale from pole and a frustrated Oliphant will be 11th.