BMW star Colin Turkington moved back into the joint lead of the British Touring Car Championship by taking a lights-to-flag victory - plus fastest lap - in the first race at Snetterton.

Turkington soaked up pressure on a slippery track, following overnight rain, while he got the tyres up to temperature on his West Surrey Racing-run BMW 330i M Sport.

He also had an advantage by being on the drier inside racing line of the grid, which caused outside front-row starter Jake Hill to lose ground off the start and concede second place to Tom Ingram.

Ingram's Speedworks Motorsport-run Toyota Corolla went to the outside of Turkington at Agostini on the opening lap, but was edged wide by the BMW, and the lost momentum allowed Hill's AmD-fielded MB Motorsport Honda Civic Type R down the inside at the following Hamilton turn.

There was contact between the two, and Hill ran wide, allowing Ingram back into second.

Ingram kept Turkington under pressure in the opening couple of laps, but the four-time champion had extended his advantage beyond a second by the end of lap four of 12.

Now it was Hill making progress, and he thought he saw a gap into the Williams hairpin at half-distance.

It wasn't quite big enough, and there was a collision, Ingram slewing wide and the Honda scampering past, before Hill let the Toyota back ahead to prevent any post-race penalties.

That extended Turkington's lead to over four seconds, and the charging ingram could only trim it back to 2.570s by the chequered flag.

"It was a great start to my day," said Turkington.

"We were all fretting at Team BMW because we had the wet tyres on as we sat in the garage and it was taking a long time to dry, but in the end it flicked over and we went onto slicks. 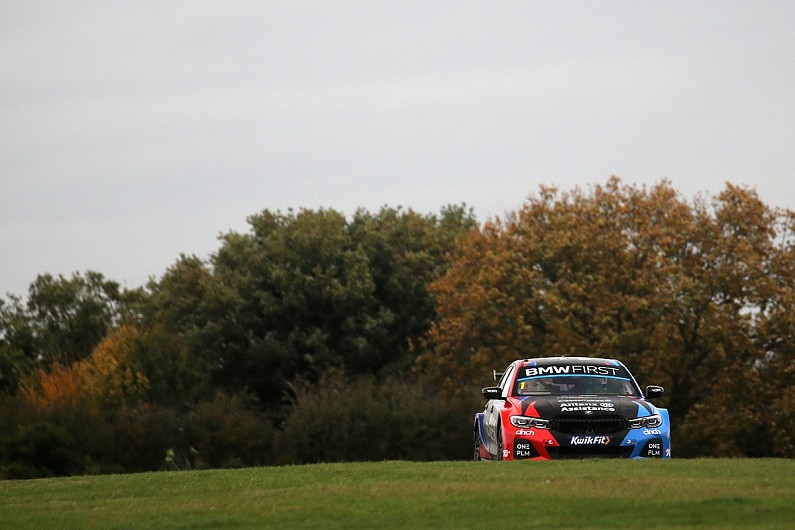 "The first lap was a bit tricky - as the leader you're doing the experimentation, but I knew if I could keep Jake and Tom behind I had a good chance of converting the race."

The Ingram/Hill incident allowed the Motorbase Performance Ford Focus of Rory Butcher into their midst, but the Scot fell away and finished fourth.

Butcher was another slow starter on the outside of the grid, as was pre-weekend points leader Ash Sutton's Laser Tools Racing Infiniti Q50.

Sutton had a clash with Butcher's team-mate Ollie Jackson into Riches away from the start, while the BMW of Tom Oliphant spun in front of them, but Sutton still emerged in fifth, behind the Team Dynamics-run Honda of Dan Cammish.

Butcher muscled his way past Sutton for fifth at the Esses, and then got Cammish for fourth into the hairpin on the fifth lap.

Cammish also fell prey to Sutton, into Oggies on the seventh lap, and he was only just ahead of the Ciceley Motorsport Mercedes A-Class of Adam Morgan at the finish.

Sutton's fifth place means he now shares the series lead with Turkington, with Cammish eight points adrift and Ingram 23 behind.

The Excelr8 Motorsport Hyundais made good progress into the top 10, but Senna Proctor could not keep Josh Cook's BTC Honda behind, the double Croft victor taking eighth from Proctor.

The second Hyundai of Chris Smiley lost the final spot in the top 10 to Michael Crees (BTC Honda) with three laps remaining.

Oliphant recovered to 14th following his first-corner off, but the longer-delayed Jackson could only make it to 21st.