Despite a Balance of Performance change between qualifying and the race that reversed weight and power increases given to Cyan's Lynk & Co 03 prior to the start of the weekend, Bjork won with relative ease - although he and Muller were kept on their toes by the Cupra of third-place finisher Mikel Azcona.

The Lynk & Co has quickly gained a reputation for pulling away well and Bjork and Muller demonstrated that at the start of the 12-lap race, with Bjork maintaining his advantage on the run to Tarzan.

But the leading duo were closely pursued through the opening corners by Azcona, who passed the third Lynk & Co of Andy Priaulx on the run to the first corner.

Bjork did not pull clear of Muller - whose mirrors were full of Azcona's PWR Cupra throughout the race - at any point, but always had a safe margin in hand over his four-time World Touring Car champion team-mate and remained ahead until the finish.

His winning margin was 0.704 seconds, with Muller a further 0.566s clear of Azcona - who appeared to have better pace through the corners than the Lynk & Cos but was unable to draw close enough on the straights. 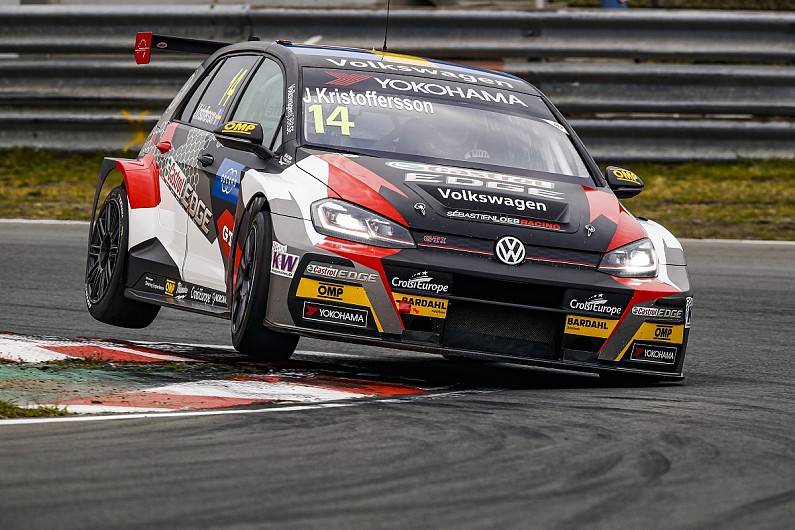 Fourth place changed hands on the final lap, as double World Rallycross champion Johan Kristoffersson surged past Priaulx to claim his best finish since switching to WTCR for 2019.

Kristoffersson ran side-by-side with Priaulx through the opening sequence of corners before ceding the position and, despite sticking with the third Lynk & Co, appeared destined to finish fifth.

But a superior exit off the banked Hugenholz corner on the final lap allowed Kristoffersson to draft his Sebastien Loeb Racing Volkswagen Golf GTI past Priaulx's car through the subsequent sequence of high-speed kinks.

Mehdi Bennani made up two places on the opening lap to run sixth in his SLR VW and would go on to finish in that position, ahead of Yann Ehrlacher - who also made up two positions in the fourth Lynk & Co after receiving a five-place grid penalty after qualifying.

Nicky Catsburg was the only Hyundai representative to score points, finishing 10th in his BRC Racing i30 N, ahead of Jean-Karl Vernay (WRT Audi RS3 LMS) and Esteban Guerrieri.

The four points Guerrieri scored for finishing 12th move him into a one-point lead in the drivers' standings, as Munnich Motorsport team-mate Nestor Girolami scored only one point despite making up three positions to finish 15th in his Honda Civic Type R.

Daniel Haglof (PWR Cupra) and Aurelien Panis (Comtoyou Cupra) were the other points scorers to finish between the pair.