Tanak's morning was not plain-sailing, as the Estonian "f*cked" the brakes aboard his Yaris to lose nine seconds to stage eight winner Kris Meeke.

Tanak's lead gap was reduced from 17.3s to 11.3s over Latvala, but after some quick roadside repairs he was back on the pace on stage nine Cabeceiras de Basto.

Latvala opted for two hard tyres whereas his team-mates went for mediums all round, which began to pay dividends as the morning wore on.

Meeke had pulled three seconds from Latvala on Vieira do Minho, but Latvala responded on the next to claw back 2.7s with a stage win of his own, 0.4s up on Tanak.

Latvala really made his tactic count on the longest stage of the rally that concluded the morning, the 23-mile Amarante test.

The Finn won the stage by 4.2s over Thierry Neuville, edging 13.3s clear of Meeke and gnawing 5.8s out of Tanak's lead.

Neuville and Sebastien Ogier are in the middle of their own tussle for fourth position behind the trio of Toyotas, but are only 5.3s shy of the podium.

Ogier nicked 1.1s from Neuville on the morning's first test, and grabbed another 0.7s on the next to wrestle fourth place off Neuville by a mere 0.2s.

But Neuville responded on stage 10 to grab 2.1s back from Ogier and heads into the afternoon with a cushion of 1.9s. 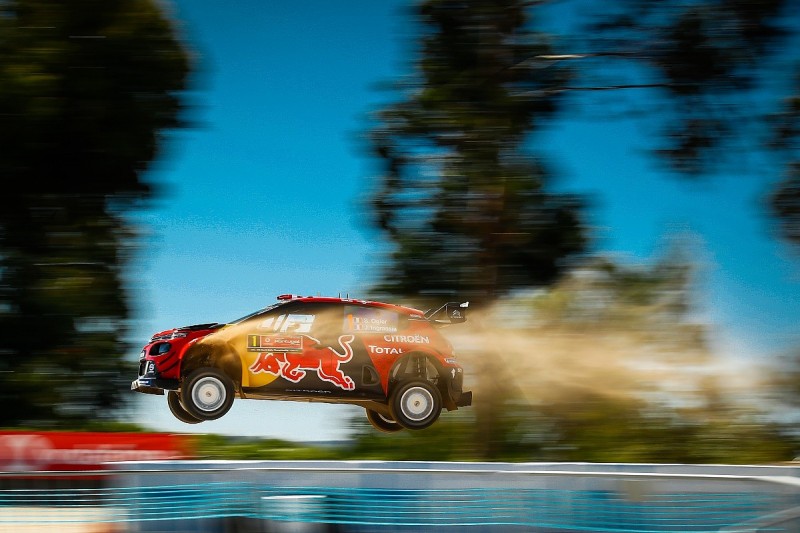 Teemu Suninen and Esapekka Lappi are embroiled in a battle for sixth position.

M-Sport's Suninen began Saturday eight seconds ahead of his rival, but heads to service 9.1s with his car "down on power" on stage 10. He ultimately lost 14.7s and sixth place to Lappi in the stage.

Greensmith is eighth after starting the loop 1.6s ahead of Lappi but has dropped to 36.3s behind Suninen in seventh, still experiencing intermittent issues where his M-Sport Fiesta cuts out.

The Briton also survived a brief scare on stage nine, when he was momentarily lifted onto two wheels going through a tightening right-hander.

Elfyn Evans is back inside the top 10 and up to ninth after his throttle issues on Friday, ahead of WRC2 Pro leader Kalle Rovanpera.

Dani Sordo, who came into Friday in 48th overall, incurred several minutes in road penalties after dropping down the start order. The Hyundai was due to open the roads, but instead he slotted in between Ogier and team-mate Neuville.

The Spaniard claimed the decision was made to "work on things on the car for Sardinia", but it also theoretically benefited Neuville who would face a cleaner road than his rival Ogier.

The third Hyundai of Sebastien Loeb is well outside the top 10, with the nine-time champion receiving an order ahead of stage 10 to incur a time penalty of his own so as to run behind Ogier and in front of Sordo.